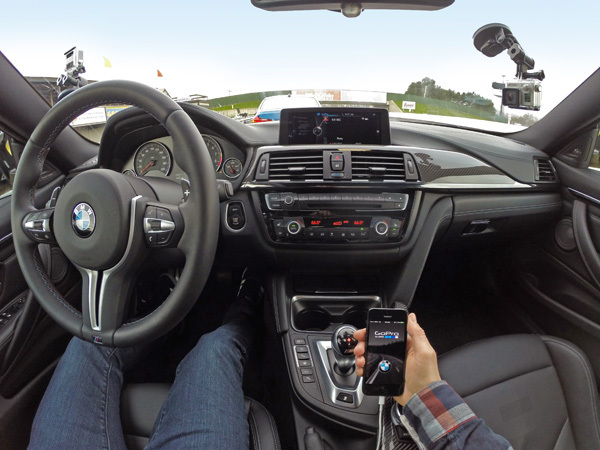 BMW Group and GoPro have announced the first mass production of a GoPro camera with vehicle on board infotainment system. Vehicles equipped with the BMW Apps or MINI Connected option, are now able to configure and control a GoPro camera using BMW’s iDrive controller and high-resolution screen. The integration will be functional starting July 2014 on all BMW models 2012 or later when used with a Wi-Fi equipped GoPro camera.

GoPro has a line of versatile cameras and accessories that are designed to allow people to self-capture themselves enjoying their favorite activities. The integration of BMW Group and GoPro was created with that in mind and also to reduce driver distraction. BMW Go Pro users have the option to choose between six pre-set camera modes which are: Leisure Drive Facing Out, Night Driving, Sport Drive Facing Out, Drive Camera Facing In, Winding Road Time-lapse, and Straight Road Time-lapse. According to BMW Group the camera’s actual field of view is displayed in near real-time while the vehicle is stationary.

With the help of BMW’s large central screen the camera displays vital camera status, including recording elapsed time, battery life, and Wi-Fi signal strength. The driver can stop or start the RECORD function at any time. The Driver may also turn on the camera’s SLEEP mode in order to preserve battery life between shots. The updated GoPro App is now available for free in the ITunes Store.