Corvette Museum Plans to Keep Some Damaged on Permanent Display 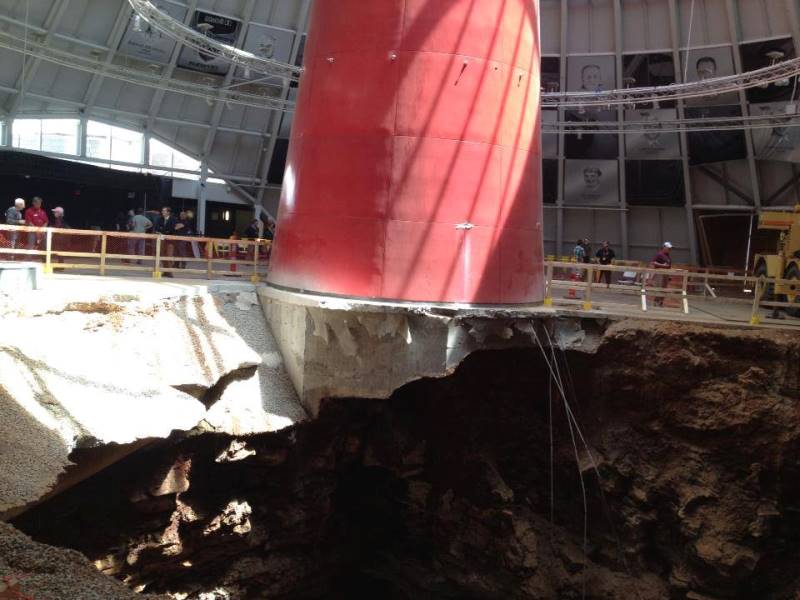 Last week members involved with the National Corvette Museum’s sinkhole recovery and remediation met to discuss the future of the Skydome and construction plan moving forward.  Presentations were made of all of the findings, from drillings, to microgravity readings, and the WKU cave and karst team’s exploration into the hole.

The team thinks the sinkhole was caused by the collapse of a portion of a cave roof, although they are still compiling data. Several things could have caused this, including the extra weight from clay soils above the roof becoming saturated from heavy rain. The team stressed that there is no reason for anyone to be any more concerned for safety here than any other area prone to significant karst development and sinkhole collapse.

Moving forward the team is exploring ways to rebuild the Skydome floor.  One such plan includes drilling with micro piles then adding beams to ensure the Skydome floor is fully secure.  The Museum is also exploring various ideas, which would in some way preserve a portion of the sinkhole, helping to tell the story of what is now Museum and Corvette history.  “We will continue to explore these ideas as the process has not moved along far enough to know if keeping a portion of the hole is feasible or not,” said Wendell Strode, Executive Director of the Museum.  “The interest in our sinkhole and the rescued Corvettes has been more than expected, and our attendance for March was up 56% over March of last year,” Strode added.  “Our special display focusing on this event is now open in our Exhibit Hall.  Current plans are to keep the cars on display as they are so that guests through the summer and especially the thousands attending our 20th Anniversary Celebration will have a chance to see the cars and witness the sinkhole for themselves.”

The Museum has also received a donation of a 40th Anniversary “Ruby Red” Corvette. Lynda Patterson of Louisville, Kentucky donated her car in response to the news of the sinkhole swallowing another “Ruby.”  Representatives from GM will be meeting with the NCM next month to inspect each of the Great 8 and determine which ones are appropriate to be restored.  The Corvettes that are not restored will be kept on permanent display as part of preserving and telling the story of the February 12th Sinkhole Collapse.