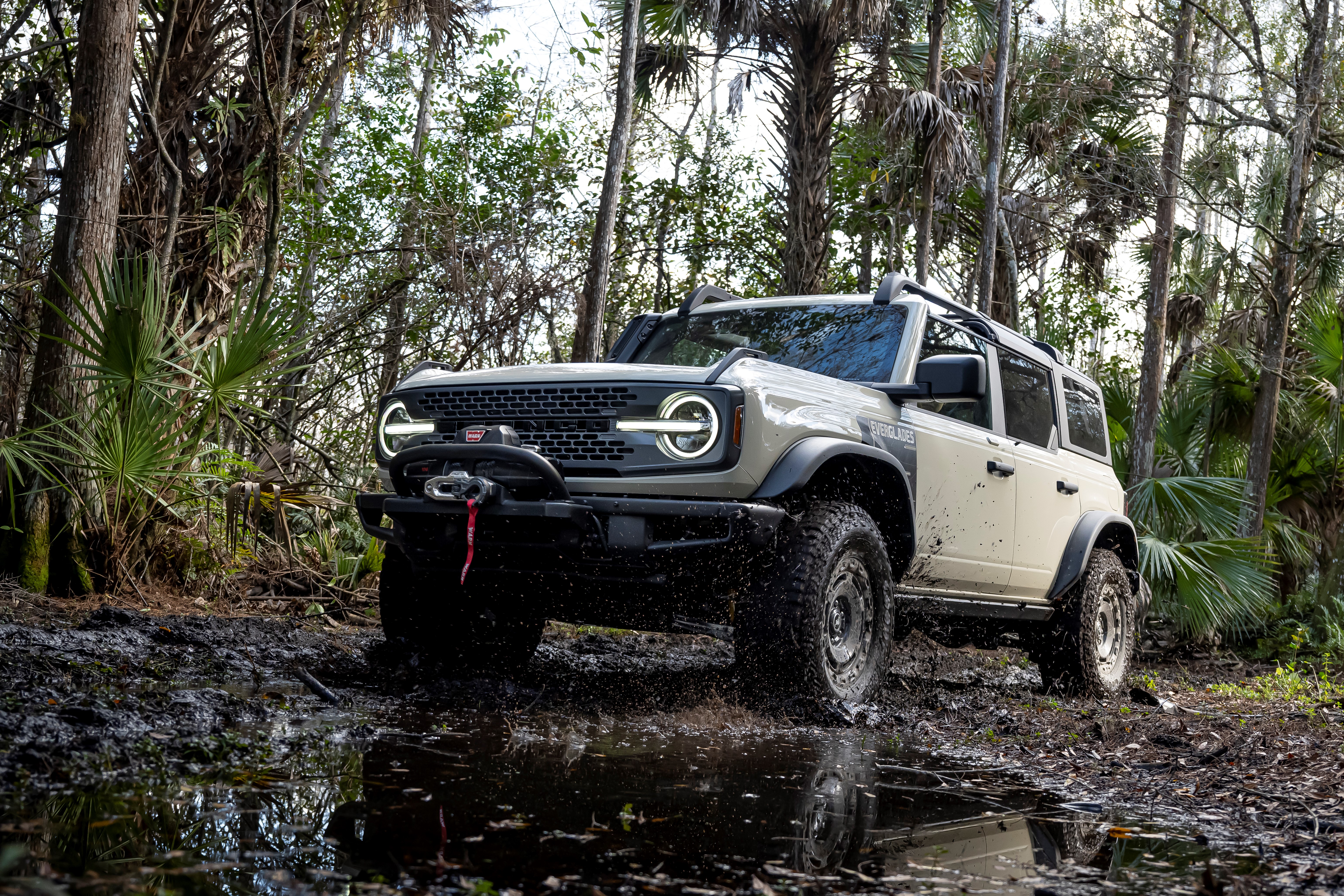 Ford has unveiled the Bronco Everglades, a special edition trim of their popular off-road utility vehicle.

This new trim made its debut online prior to it’s Chicago Auto Show spotlight, and follows the recent unveiling of the Bronco Raptor. Where the Bronco Raptor was built for high-speed dune racing and the dry conditions of the Baja, the Everglades takes a slower, wetter, and more utilitarian approach to off-road enjoyment. 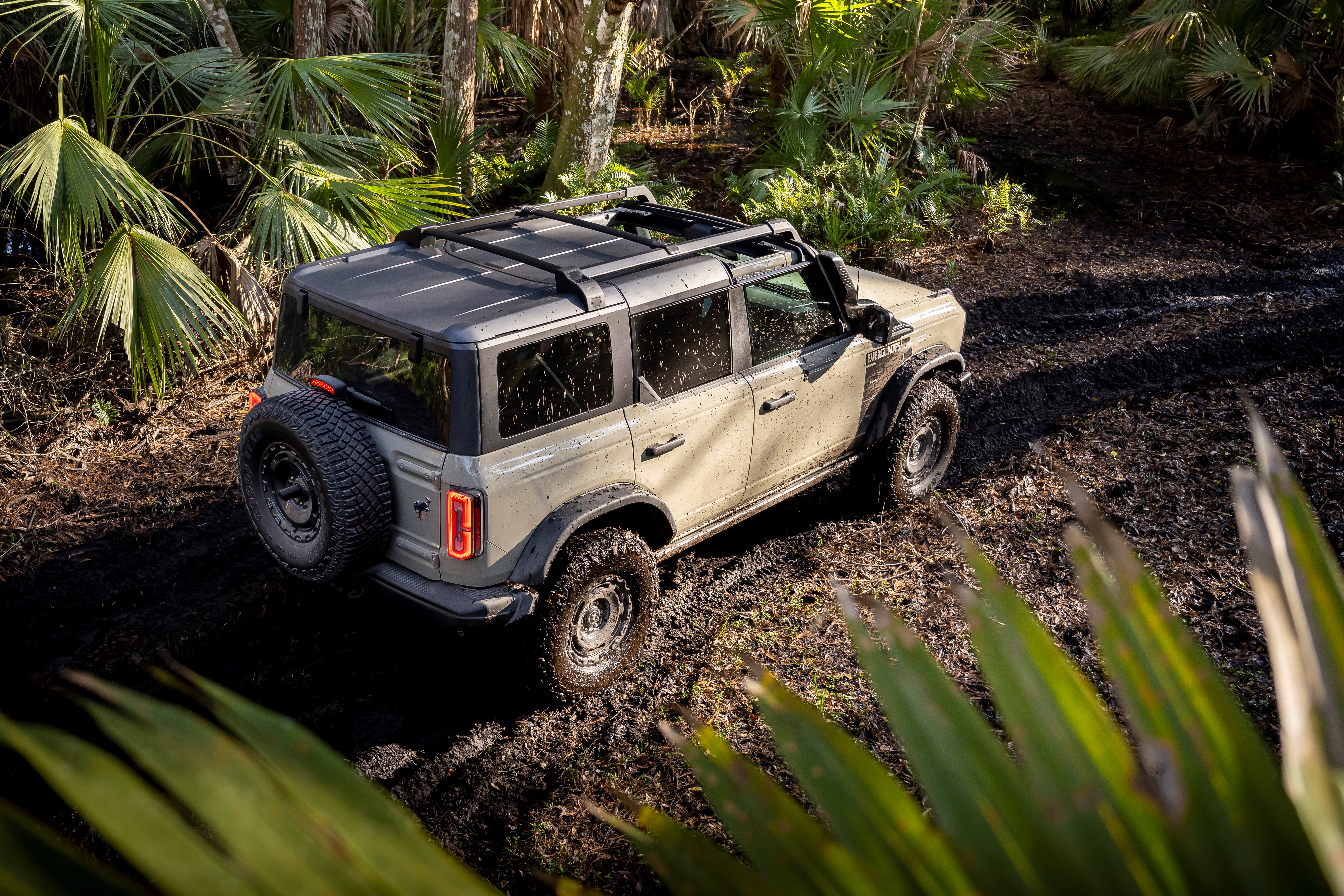 Arguably, the most defining feature of the Everglades is the factory-installed snorkel along the passenger A-pillar, which allows for air to be safely sucked into the intake while traversing standing water. Its design allows for quick swapping of the direction of the air inlet. 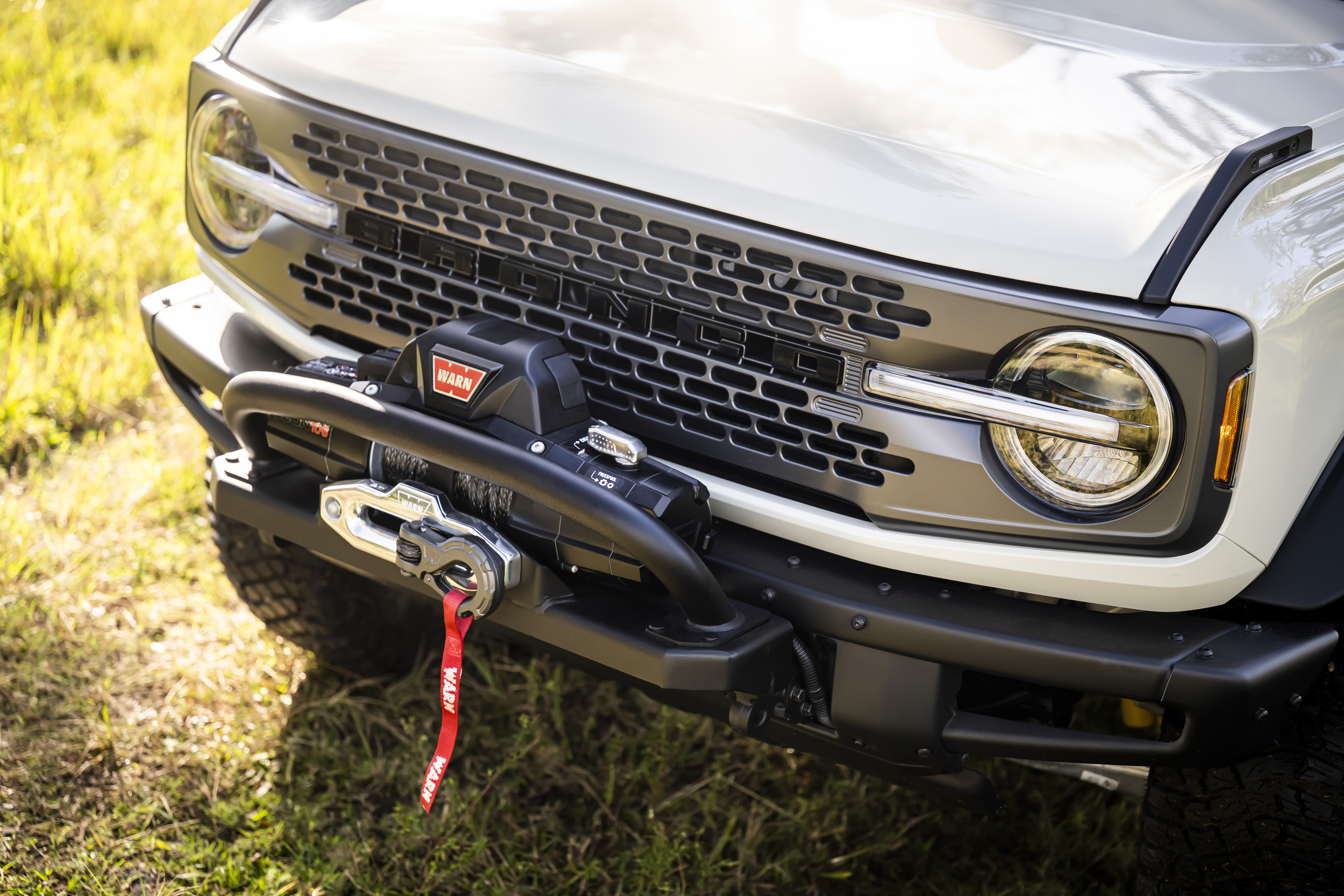 Another standout is the WARN winch mounted to the Ford Performance heavy-duty front bumper. Rated at 10,000 pounds, the winch can hook up to vehicles, objects and obstacles with a 100-foot synthetic line. The bumper and winch partially disguise the incognito Carbonized Gray grille and blacked-out “Bronco” lettering. 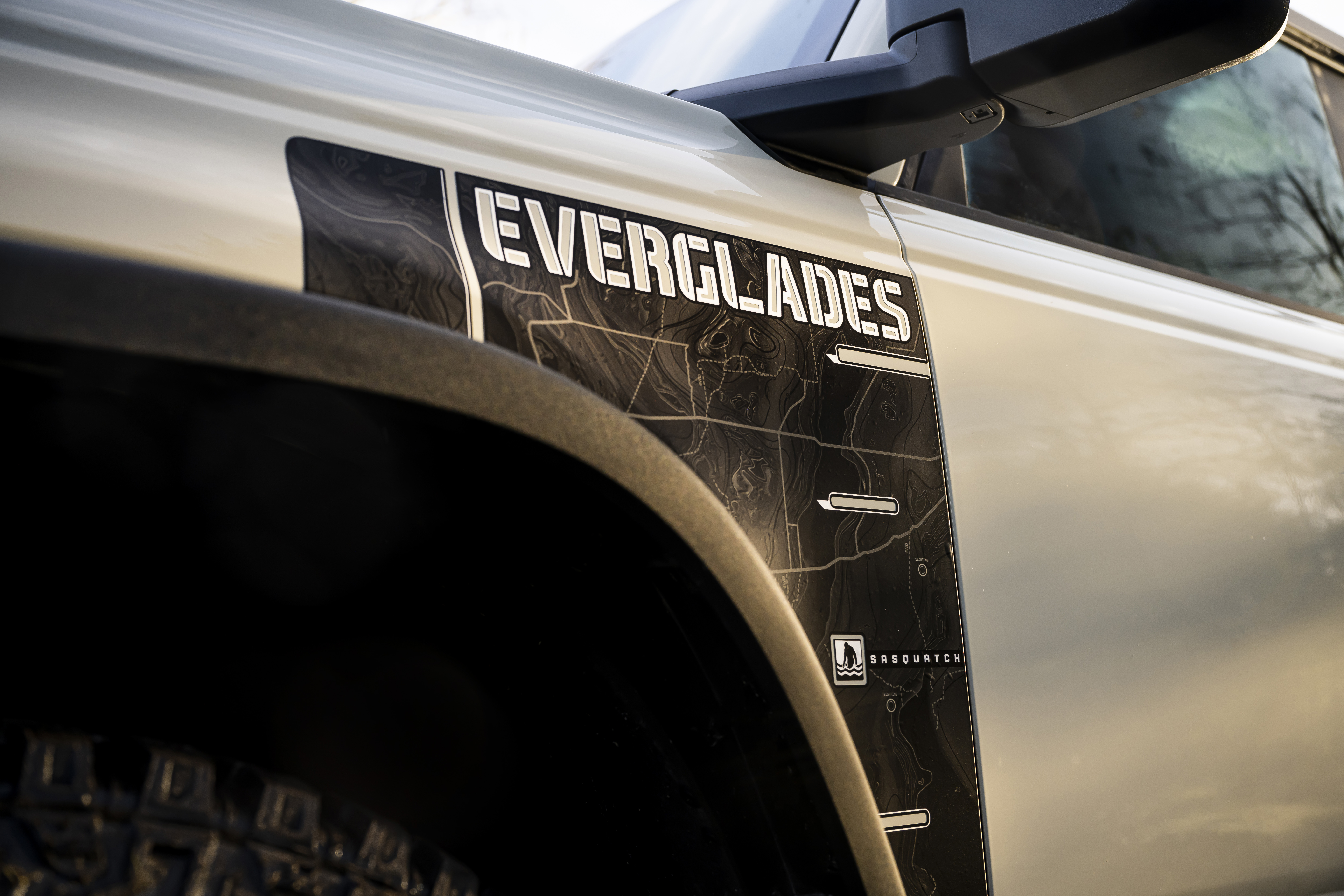 The next thing you may notice are the package-exclusive side decals. Replacing the standard triangle badges found on other Broncos, the Everglades feature a unique quarter fender graphic on either side. It shows the topography of the Florida Everglades, paying homage to the tropical wetlands the vehicle is named after. Speaking of fenders, the Bronco Everglades sports unique squared wheel arches flaring out to Sasquatch Package width. Those arches shroud 35-inch Goodyear mud-terrain tires wrapping special 17-inch Carbonized Gray alloy wheels. 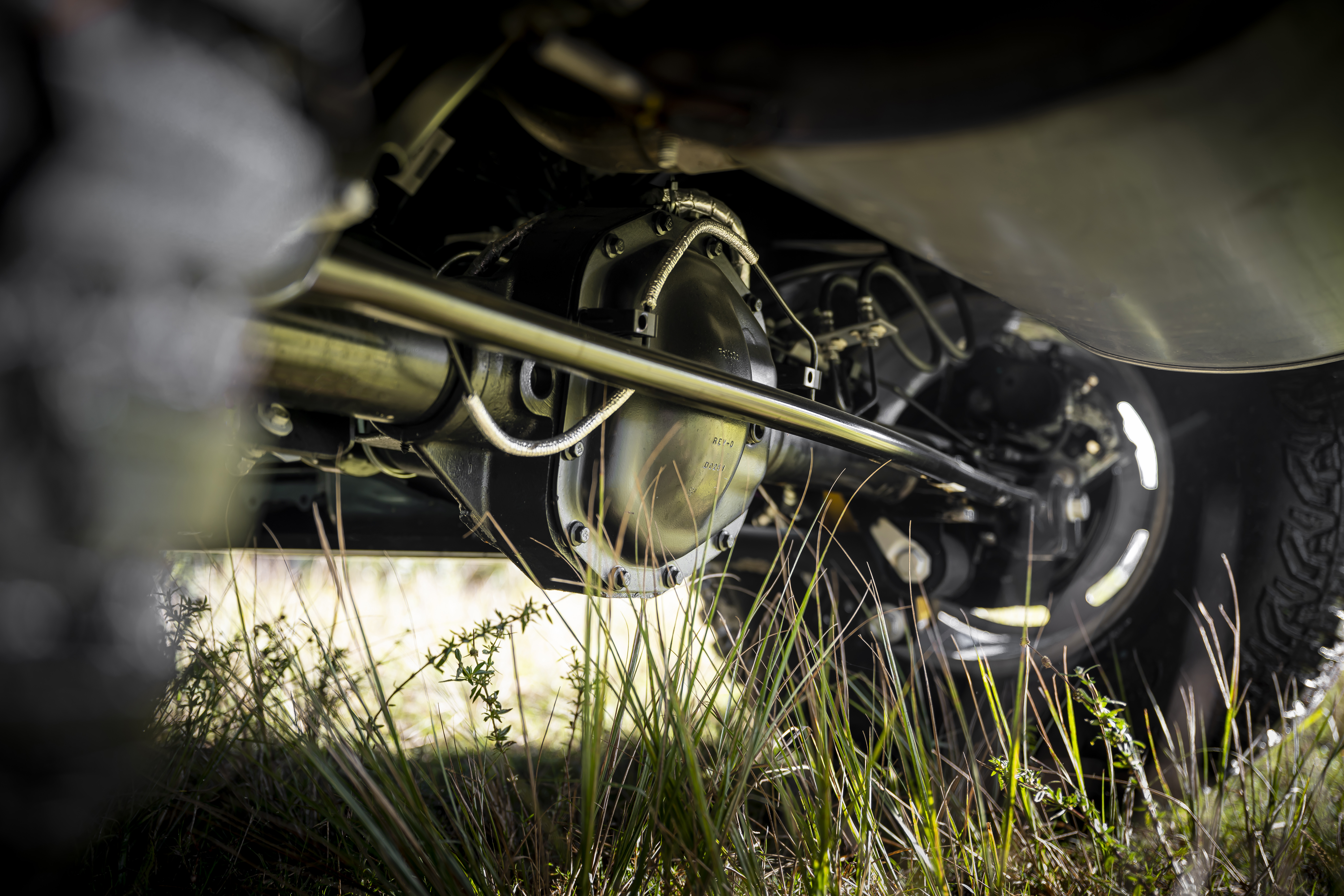 Less notable features include the front and rear axles, the transfer case and transmission, which have been engineered with raised vents for improved water fording. Along with the aforementioned snorkel, this allows the Bronco Everglades to traverse 36.4 inches of water.

The Bronco Everglades starts as a 4-door Bronco equipped with the Bronco Sasquatch Package and all the off-road accouterments we’ve seen before. It’s powered by the Bronco’s 2.3-liter 4-cylinder Ecoboost engine, delivering 300 horsepower and 325 lb-ft of torque. That is then paired to Ford’s 10-speed automatic transmission and an advanced 4x4 system. The same Goes Over Any Type of Terrain (GOAT) modes are also present, allowing drivers to traverse through a variety of conditions. 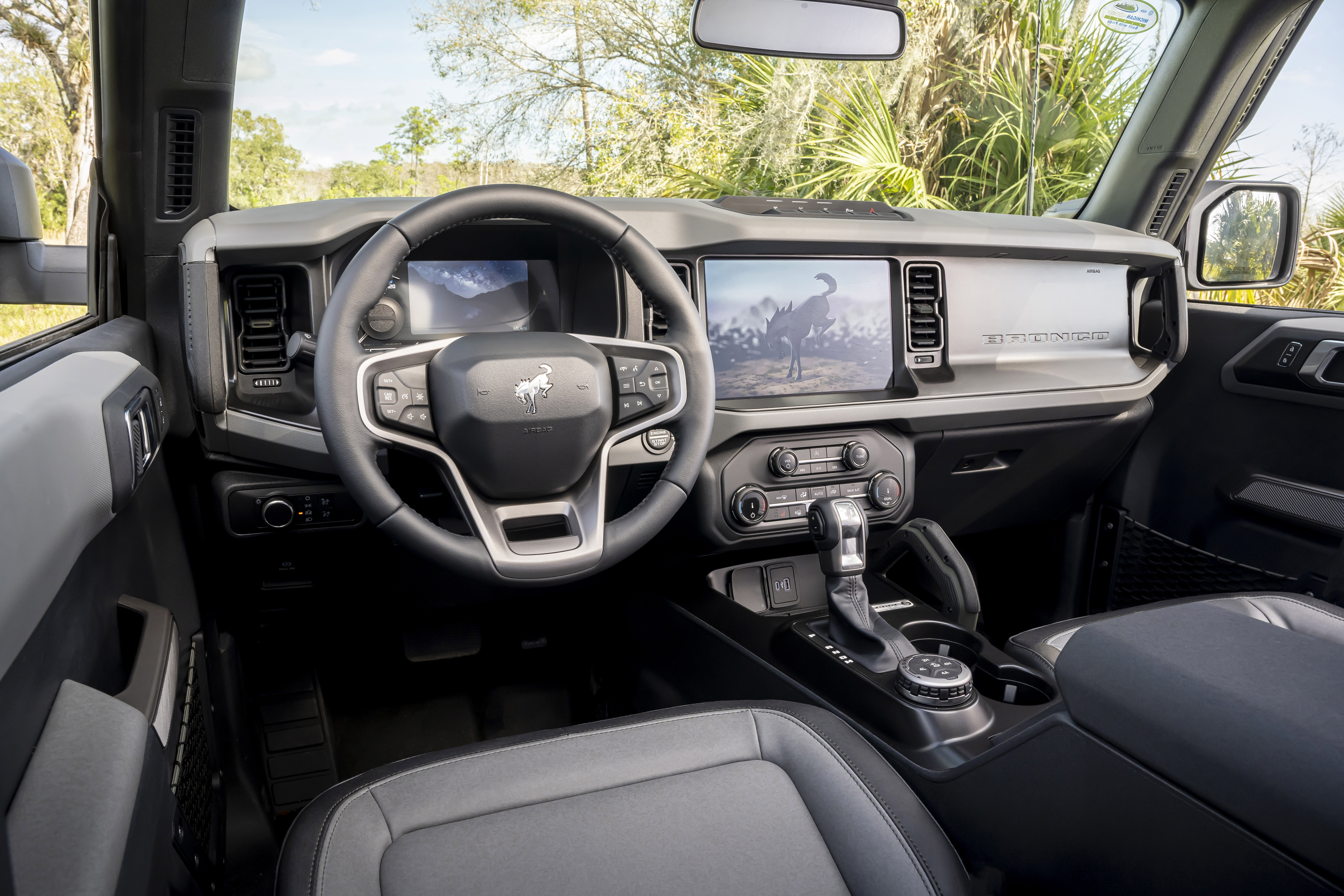 Inside, the interior features a unique variant of Ford’s marine-grade vinyl; a gray and black color scheme with a matching dashboard. Urban Green accents adorn the grab handles, air vents and seat stitching. In addition to mid-package content, the Bronco Everglades will include the high-package’s 12-inch SYNC 4 infotainment system. 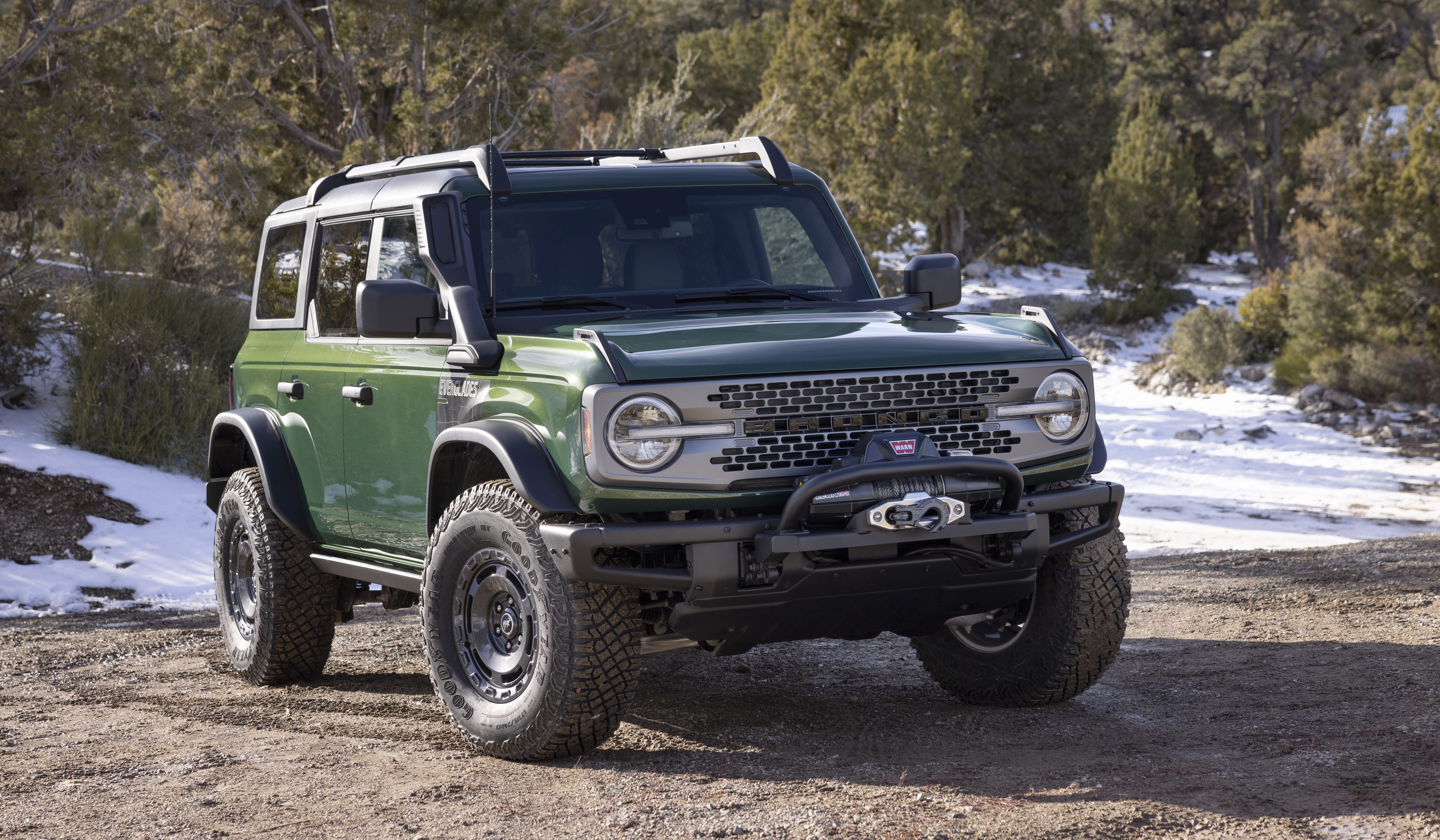 The Bronco Everglades is expected to reach dealerships sometime this summer. Pricing, after destination fees, starts at $54,495; however, it should be noted that they are currently only available for existing Bronco reservation holders.