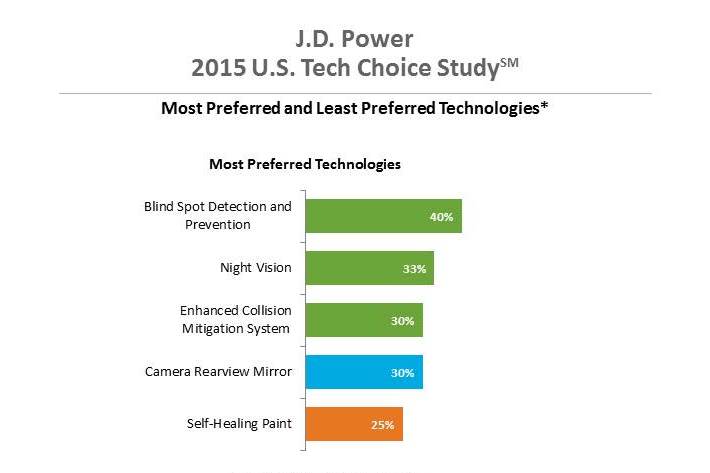 Three of the top five technologies consumers most prefer in their next vehicle are related to collision protection, according to the J.D. Power 2015 U.S. Tech Choice Study.  J.D. Power recently released the Study that shows collision prevention is more important to drivers than infotainment.

Conducted between January and March of this year, the study shows preferences from 5,300 consumers who bought or leased a new vehicle in the last five years.

According to the study the most requested technology was blind-spot detection with 40%. Night vision came in second with 33%. Both rearview cameras and enhanced collision mitigation received a 30%, while self-healing paint received 25%.

"There is tremendous interest in collision-protection technologies across all generations, which creates opportunities," said Kristin Kolodge, Power's executive director of driver interaction research.

The study also shows the least preferred technologies. Although smartphones play a vital role in everyday life, Apple CarPlay and Google Android Auto technologies were consistently among the lowest preference scores across all generations.  Systems that monitor health and wellness, hand-gesture controls, biometric driver sensors, and touch screens that provide tactile feedback were amongst the least preferred list.

To check out more of the U.S. Tech Choice Study click here.