A team of motorsport enthusiasts will drive from Atlantic Coast of Florida to the Pacific Coast of California on just one tank of renewable fuel. The team will use NEXBTL renewable fuel that is produced from bio-based raw materials by Neste. Neste is the world's largest producer of renewable diesel.

"Americans have a long tradition of taking cross-country road trips, sometimes aiming for speed records, sometimes just making a leisurely jaunt. One team is taking a different approach to this long-distance challenge in the middle of June 2015: drive coast-to-coast on one tank of fuel made of completely bio-based raw materials. We believe this may be a first time for this type of trip," said Kaisa Hietala, Executive Vice President, Renewable Products at Neste.

"I'm really excited about the next project I'm doing. It is NEXBTL renewable diesel and we are driving across the entire U.S. on one tank of fuel. It will be an amazing trip," said Foust.

The motorsport elite will hit the road in a Superlite Coupe (SLC) that is custom-built by CLP Motorsports. The SLC has the aerodynamics necessary for maximum efficiency at speed, has all of the handling of a race car, is street legal and powered by a modified Volkswagen 1.9-liter TDI diesel engine.

The cross-country drive will start on Sunday June 21st. The SLC car will drive across Interstate 10 which is more than 2,400 miles long. It runs through eight states, starting in Atlantic Beach, Florida, and ending on the Pacific Coast in Santa Monica, California. 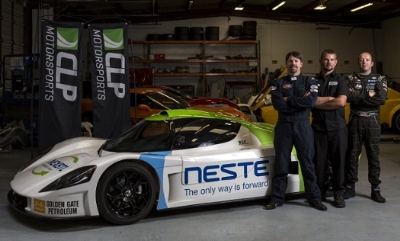