The BMW M3 CS is a Limited Edition Thrill Seeker 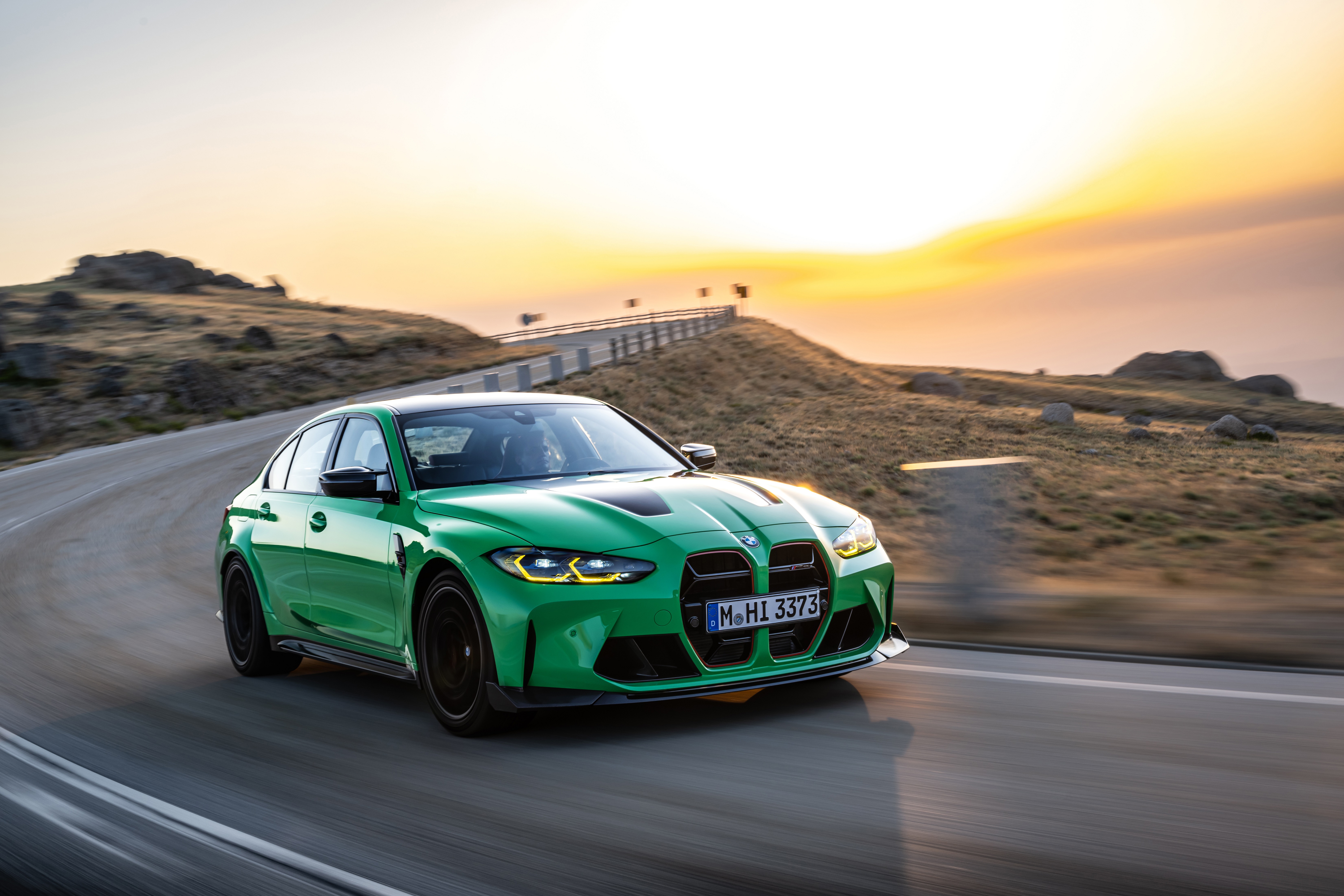 BMW has unveiled the all-new M3 CS, limited edition and available for the 2024 model year.

The “CS” stands for “Competition Sport,” though this new model is more than just abbreviated lingo badged onto the rear deck. The M3 CS is lighter, more powerful, and ultimately faster than the “standard” M3. 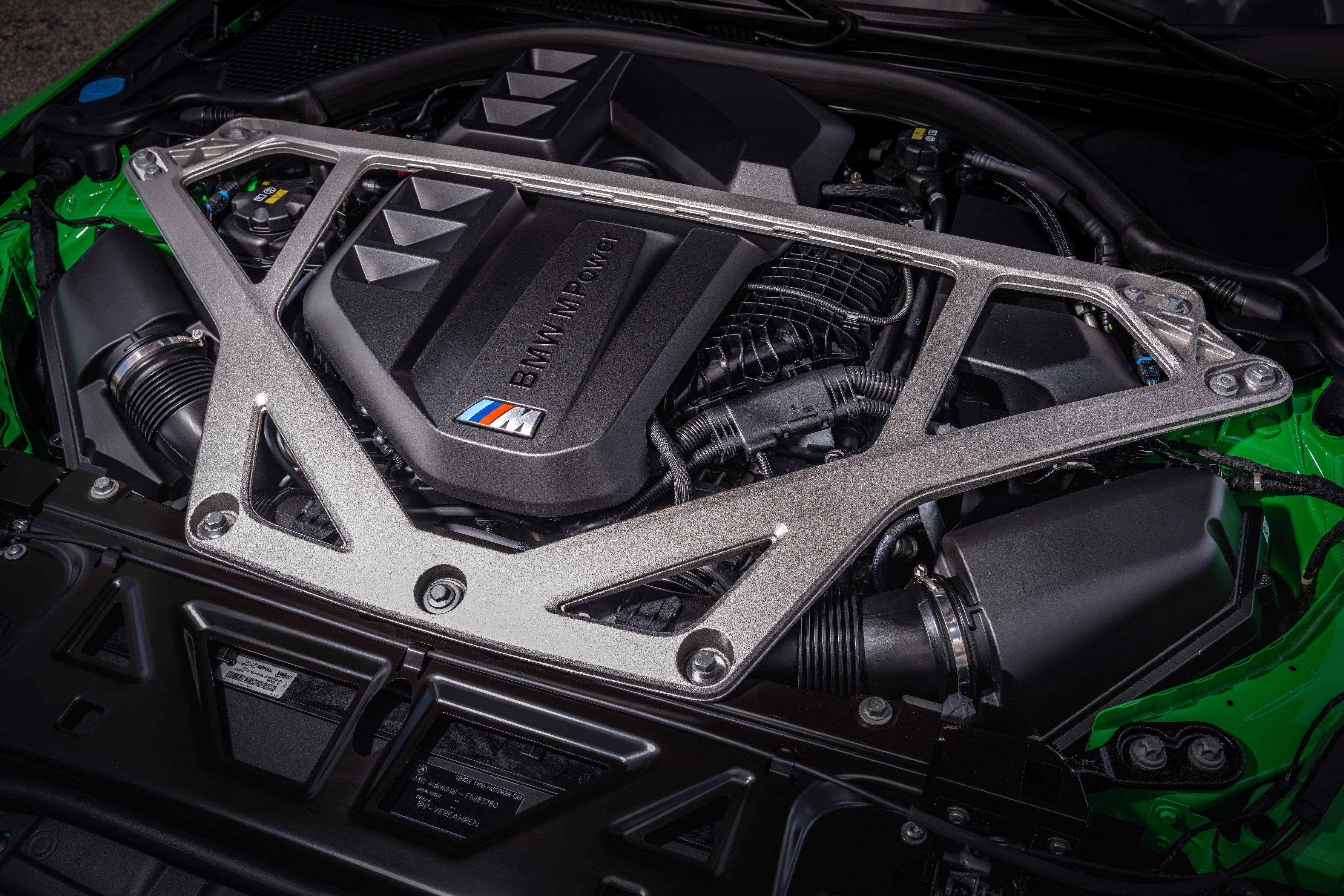 It all starts with the engine, a high-revving TwinPower Turbocharged 3.0-liter inline-six cylinder paired to an eight-speed M Steptronic transmission. The engine supplies up to 543 horsepower and 479 lb-ft of torque, channeled through the transmission to the M xDrive all-wheel drive system. For the record, that’s a 40 horsepower jump up from the M3 Competition. Launching from a dig, the M3 CS will hit 60 mph in an estimated 3.2 seconds; wring it out further and you’ll eventually meet 188 mph.

The aforementioned 3.0-liter engine also serves as the basis for the engine found inside the BMW M4 GT3, so the raw performance was never in question. The horsepower gains can be mostly attributed to the increased boost pressure, up to 30.5 psi from 24.7 psi. There’s a lot more nerdy minutiae we can get into with regards to the engine, transmission and so on, but let’s jump over to the construction of the vehicle itself. 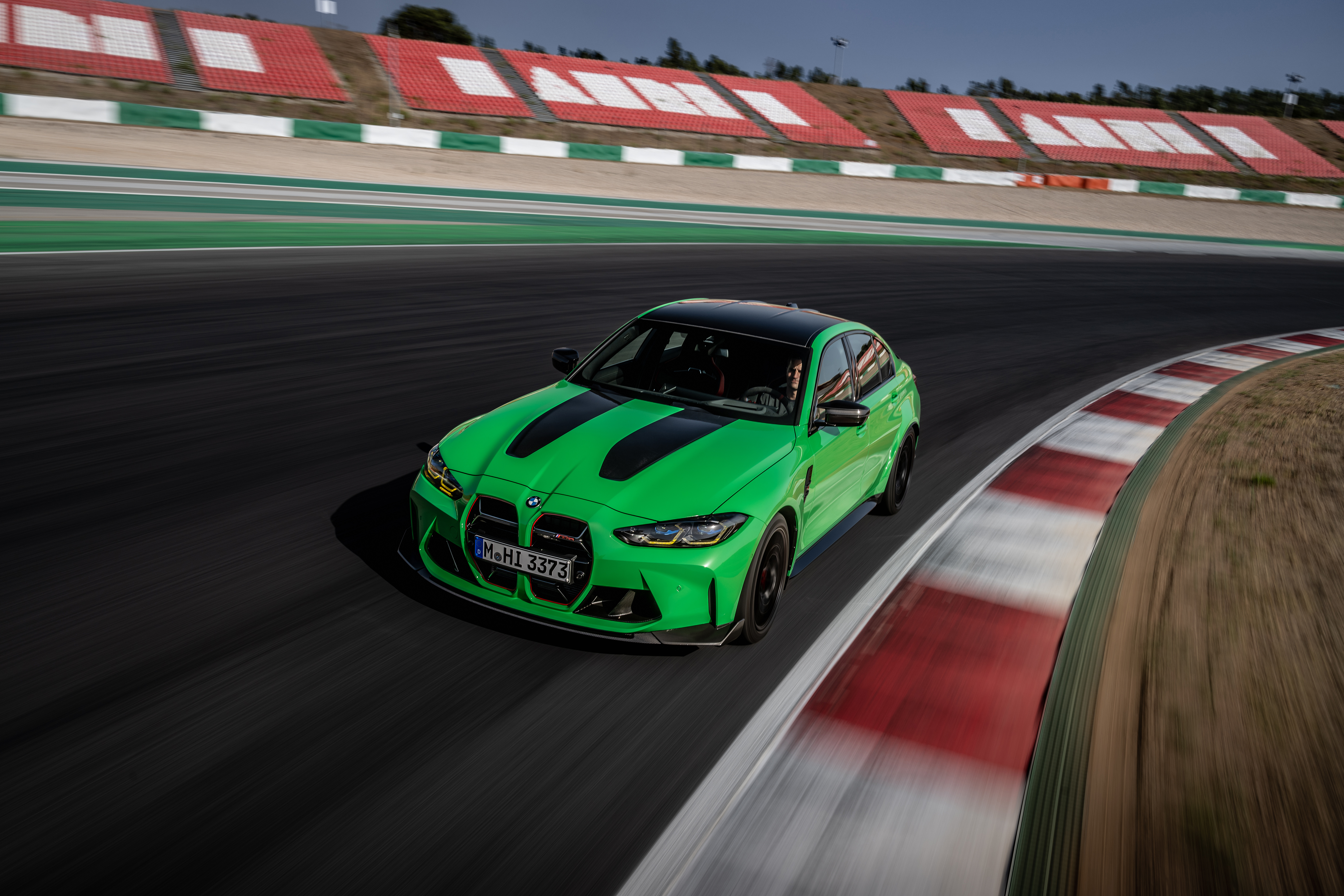 Starting with the chassis, it has been specially tuned for the M3 CS with the engine’s performance in mind. Calibrations have also been made to the adaptive M suspension and M Servotronic steering, all aiding in track and street handling. Unique wheel camber settings, dampers and anti-roll bars optimize the vehicle’s already-precise nature. Of course, just as important is where vehicle meets pavement; M Compound brakes or optional M Carbon ceramic brakes are sheathed by forged M light-alloy wheels, available in either matte black or Gold Bronze. The 19-inch front wheels are wrapped in 275/35ZR19 tires, whereas the rear’s 20-inchers receive 285/30ZR20’s-- Michelin Pilot Sport Cup 2’s, if you so choose, at no cost. 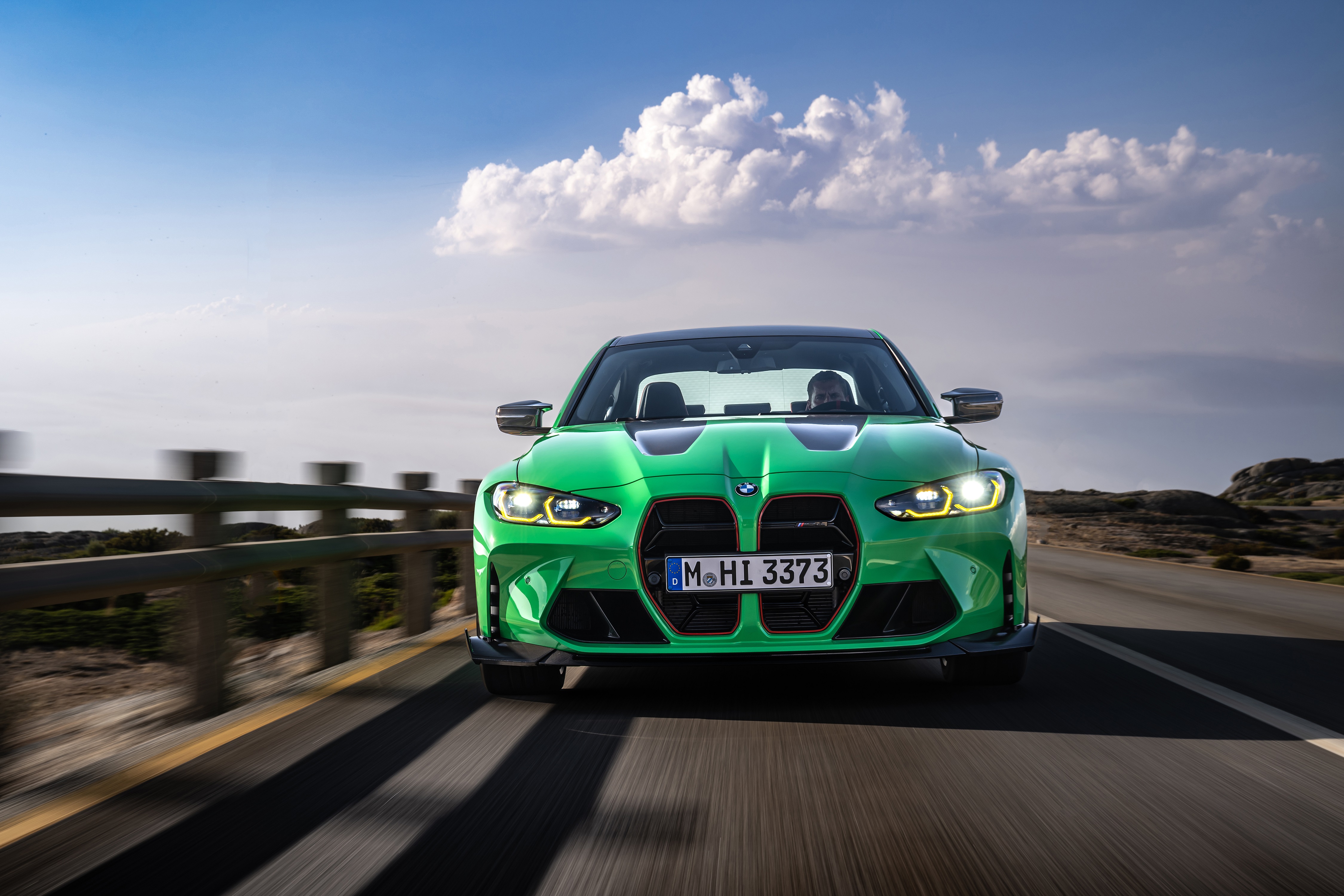 The exclusive design of the Competition Sport is best seen upfront; the large twin kidney grille is served up in a special “frameless” design, featuring red contour lines and a model badge on the upper grille bar. The daytime running lights bookending the grille illuminate yellow rather than white, reminiscent of competition GT cars. Carbon fiber reinforced plastic (CFRP) is used extensively-- the hood, front splitter, front air intakes, mirror caps, rear diffuser and rear spoiler on the outside; center console, shift paddles, and various trim pieces on the inside. The roof is also made of carbon fiber, as are the standard M Carbon bucket seats. In total, this shaves off about 75 pounds from the M3 Competition xDrive’s design. 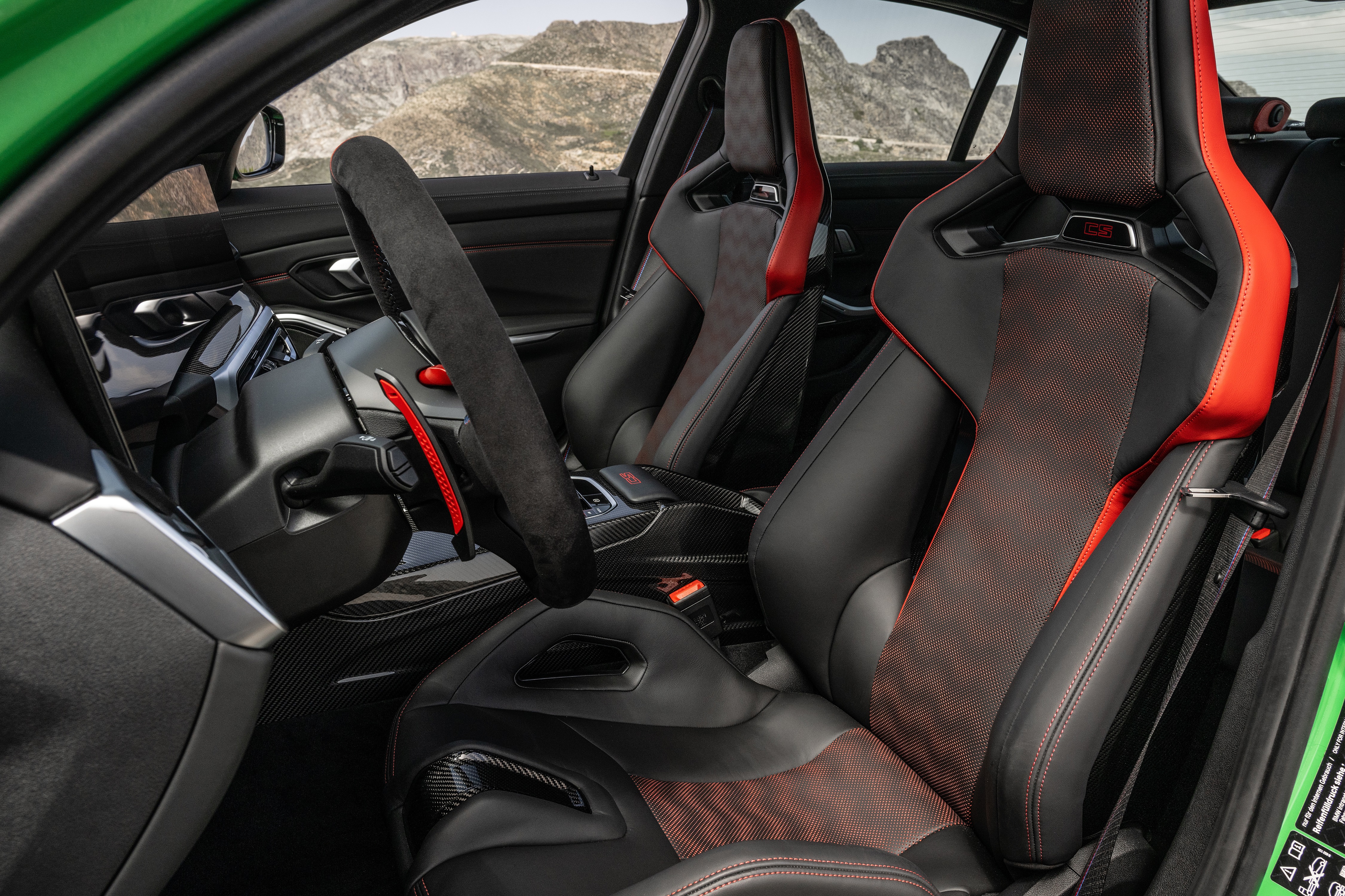 And to quickly touch on the cabin, the M3 CS, while sporty, is not without its modern amenities. It comes packaged with the latest BMW Operating System 8 and curved display, the latter formed by a 12.3-inch information display and a 14.9-inch control display. Other appointments include dual-zone climate control, Harman Kardon audio, and various safety and parking features. The aforementioned M Carbon buckets are finished in Merino leather with Mugello red accents, a theme carried throughout the cockpit.

Luxury and performance of this caliber do come at a price; in the case of 2024 BMW M3 CS, a starting price of $119,695 after tacking on the $995 destination and handling charge. Production will take place at BMW’s plant in Munich, beginning March of this year. Considering we found the 2022 BMW M3 Competition xDrive to be a “supercar in sedan clothing,” we can’t wait to see what the Competition Sport has in store for us.