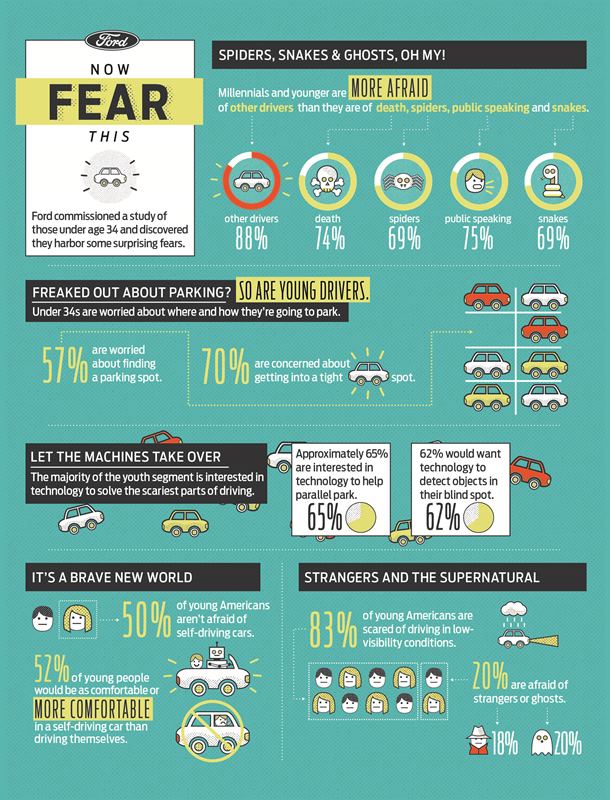 “Younger generations are growing up with different fears than their parents or grandparents,” said Kevin Shkolnik, vice president, Penn Schoen Berland. “Younger drivers are worried about distracted drivers, but they think technology isn’t just the problem, it’s also the solution, as we are seeing growing demand for driver-assistance technologies.”

The most worrisome driving situations among survey respondents include snowy or icy roads (79 percent), maneuvering into a tight parking spot (75 percent), backing out onto a busy street (74 percent), monitoring blind spots (70 percent) and not knowing where I’m going (69 percent)

Penn Schoen Berland conducted the poll on behalf of Ford Motor Company, surveying 1,000 Generation Z (ages 16-22) and Generation Y (ages 23-34) respondents in the United States. The online survey was conducted between April 29 and May 4, 2015; the margin of error is +/- 3.1 percent.

This research was conducted to evaluate Ford’s decision to offer technologies that will help drivers with common driving concerns.  Ford has announced the migration of driver-assist technologies across its product lineup over the next five years.