It’s been 50 years since the world first glimpsed the now iconic Lamborghini Countach at the Geneva International Motor Show. So, in light of the bully announcement of a modernized Countach making its way to the streets, our own Roger Mecca set out to rediscover what made the original so remarkable.

ROGER MECCA: In 1971, Lamborghini was still considered an upstart in the automotive industry. Though the Miura had made an undeniable impression on car fans around the globe, by the early 70’s, it was showing its age and the brand was still living in the shadow of Ferrari. 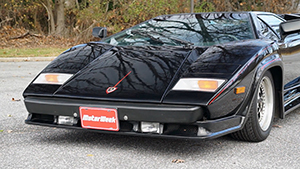 Owner Ferruccio Lamborghini was eager to take over the spotlight, and called on Miura designer Marcello Ghandini of Bertone to lead the revolution. Ferruccio’s instructions were clear: The Miura’s replacement had to be a single-purpose, fiercely powerful sports car, with unparalleled performance exceeding anything else on the road, especially anything made by Ferrari. But most of all, it had to be striking, with a design that was unlike anything the world had ever seen.

The prototype was the LP500, featuring a wedge-shaped design that was completely different from the beautiful curves found on the Miura. When it debuted at the 1971 Geneva Auto Show, jaws hit the floor, and the supercar world as we knew, would be changed forever.

David Waltos is the owner of this 1986 Lamborghini Countach 5000 QV, which he purchased in 1991. And like so many car fans over the years, his need to graduate from Countach admirer to Countach owner, was an undeniable desire.

DAVID WALTOS: I’d had a Lotus before and-and really liked the car, but when I saw this, it was just so different. It was just so wild. You know, I mean it just represents the 80’s, with all the excess. I mean the design, the engine, the whole nine yards. I just had to have it.

ROGER MECCA: That was the exact sentiment everyone shared following the debut in Geneva. So, after another three years of development, the Countach finally debuted in 1974 as the LP400. 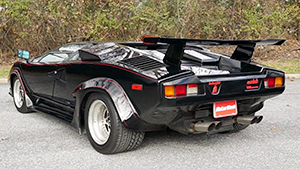 It featured a 3.9 liter V-12 with 370 horsepower, could reach 60 in around 5 and a half seconds, taking drivers all the way to a top speed of 170. And when you combine those numbers with the Lambo’s incredible looks, it’s no surprise that the name “Countach” is actually a northern Italian word used to express amazement, shock, and wonder.

Now over the years, the Countach has built up a long list of complaints that the clutch is too heavy, the steering’s too heavy, it’s too hard to shift, it’s too noisy and you can’t see out of it. And, in fact, all of those things are true.

But there’s something else that’s also true: it is so much fun to drive. Once you get up to speed, the steering lightens up beautifully, and the grip from the nearly 14-inch wide rear tires gives you the confidence to drive faster and harder. Something this car is happy to do. 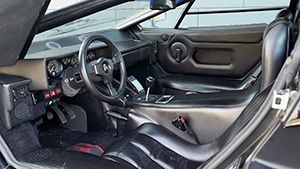 Steering feedback is excellent and when combined with the low, fighter cockpit seating position, you begin to see Ferrucio’s vision for what he wanted the Countach to be: an uncompromised race car for the road. Which reminds me, investing in some racing shoes would be a good idea, since the pedals are so close together. I actually had to take my left shoe off so I could depress the clutch without also catching the brake pedal. But, that’s just one more thing to make your time in this driver’s seat so memorable.

Make no mistake, this car is still very fast, even by today’s standards, and very loud. It is a full sensory experience- like if you were skydiving or running with the bulls in Pamplona. At no point do you forget what you’re doing and start to relaxing.

By the time this example was launched in 1985, the 5000s QV, the Countach had become much more powerful, with a 5.2 liter V-12 that produced nearly 450 horsepower, shooting the car to 60 in less than 5 seconds, hitting a top speed of 185. Designers added even more flair over the years, somehow managing to heighten the car’s appeal, and keep the Countach relevant and desirable in a world filled with Testarossas, Panteras, and 959’s.

Eventually, the Countach gave way to the Diablo, and I’ve also driven that car and have to say, unequivocally, it is much easier to drive on a daily basis. But as to which car is more memorable? Well, the answer to that question is pretty simple.