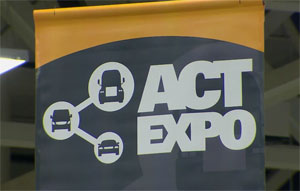 By now, we’re all used to seeing mass-market hybrid, electric and alternative fueled passenger vehicles on the road. But there’s still tremendous growth and new technologies being developed these days in commercial vehicles, and our most recent stop at the ACT Expo in Dallas, Texas showcased the latest and most promising.

JOHN DAVIS: The alternative clean transportation, or ACT Expo is North America’s largest clean fleet show. Here, manufacturers, fleet buyers, vehicle upfitters, and fuel suppliers gather to learn about the latest in green transportation technology and to try it out for themselves. 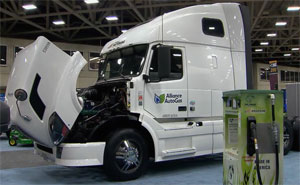 Replacing diesel fuel in commercial vehicles is a critical step in reducing our commercial carbon footprint, and one promising solution by alliance AutoGas is a system that piggybacks a second injection system onto a diesel engine and replaces part of the vehicle’s diesel fuel load with cleaner-burning and less costly propane.

ED HOFFMAN: “The great part about this system is that it’s classified by the EPA as a mixed-fuel system. So the original diesel components remain in place and can still operate on its own. The propane actually is injected and is used to offset diesel at nearly a 1 to 1 ratio.”

JOHN DAVIS: That adds up to about 7 cents per mile in fuel savings for the customer. But propane fueling stations that can accommodate commercial big-rigs out on the road are scarce, so this type of system works best for regional or hub-based fleets. 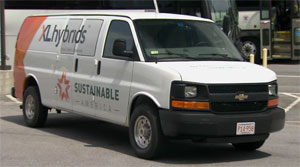 For trucks that operate in urban areas with lots of stop and go traffic, an electric power boost makes a lot of sense. XLhybrids makes a surprisingly simple and affordable add-on hybrid system for GM and Ford van chassis, including the new Ford Transit.

A shortened driveshaft with an inline electric motor module is installed, along with a rechargeable battery pack and control modules. The increased torque, always welcomed in a work truck, comes with a claimed 25% increase in MPG efficiency and no impact on cargo capacity.

DAVID BREAULT: "A lot of service vehicles, food and beverage industry. Seems to be a good fit for our drive cycles…our vans like mixed-use city/urban use. You know, the more times the vehicle starts and stops throughout the day, the better the return is." 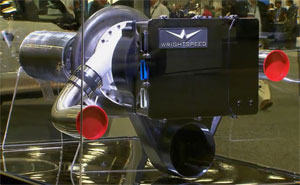 JOHN DAVIS: Taking truck electrification to the extreme is the business plan for Wrightspeed, the brainchild of tesla co-founder Ian Wright. Their full plug-in system adds an electric motor and gearbox at each drive wheel and replaces the vehicle’s original engine with an 80kw gas turbine generator to act as a range extender. 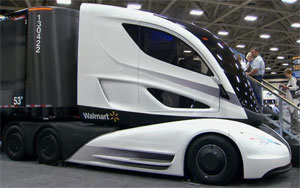 JOHN DAVIS: And the Wrightspeed system is robust enough to handle the tortuous demands of dump trucks and refuse haulers!

IAN WRIGHT: “It saves a lot more fuel in a hard stop/go drive cycle, and garbage trucks have the hardest stop/go cycle that there is …yeah, they go full throttle for 100 yards and then full brakes, and they have it perfectly calibrated how long they can leave it on full throttle before they get on to full brakes.”

JOHN DAVIS: All of these technologies seem perfectly suited to stemming our thirstiest fuel appetites, and show the promise that alternative fuels and clean power technology have for greening up America’s heavy haulers.