Medium and heavy-duty commercial vehicles have long relied on diesel as their dedicated fuel. But lately, more and more fleets are making a green choice and turning to cleaner and cheaper domestic natural gas. In response, a natural gas fueling network is being created to keep pace with the supply and demand for CNG and LNG trucks. Does this mean natural gas is finally ready for the long haul..?

JOHN DAVIS: No one has been hit harder by rising fuel prices than America’s long-haul commercial truckers. A big rig can easily burn 20,000 gallons of fuel a year, and with diesel prices projected to keep rising, this not only pinches the trucker’s bottom line, but that extra cost is passed on to American consumers. Meanwhile, natural gas prices have remained stable and are forecast to stay that way for years to come. 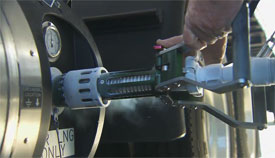 Up to now, demand for natural gas as a transportation fuel has been mostly for compressed natural gas used by light and medium-duty vehicles. City buses, refuse haulers, utilities, and other localized “captive” fleets that rely on central refueling or a fixed number of stations are a natural fit for compressed natural gas, or CNG. Long-haul trucks are more suited for liquefied natural gas, or LNG, which is created by super-cooling natural gas to -260 degrees F. As a liquid, much more fuel can be stored in smaller tanks, which means more miles per fill-up for the big rigs. Recognizing that, several natural gas companies are now joining forces with major truck stop chains and regional fuel retailers to expand the availability of natural gas for long-haul rigs. Clean energy, co-founded by natural gas pioneer T. Boone Pickens, already has more than 300 natural gas stations in operation.  But they’re far from done.

STEVE WEINER: Clean energy is building America’s natural gas highway, and what that’s going to involve is over 150 LNG fueling stations at Pilot and Flying J truck stops all across the country. And we’re building them on major trucking corridors, so you’ll be able to go from coast to coast or border to border all on natural gas. 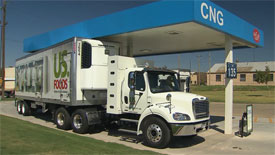 JOHN DAVIS: Energy producer Shell is proposing to add LNG fueling at up to 100 T/A and Petro truck stops nationwide. While Chesapeake Energy, the 2nd largest producer of natural gas in the US has invested in clean energy’s LNG plan, and is also working with Love’s truck stops and other retailers to add CNG fueling stations around the country for light and medium duty trucks. In their home state of Oklahoma, Chesapeake is helping the Oncue express chain of convenience stores build a CNG fueling network of their own. Oncue CEO Jim Griffith is no stranger to selling CNG, having tested the market over a decade ago. But with the price differential now reaching a tipping point, he has once again added CNG pumps to 13 of his stores, with more to come.

JIM GRIFFITH: The difference when I tried it back in the 90’s and today is the price of gasoline. In the ‘90s, gasoline was selling for 99 cents a gallon and my CNG price was 79.  So, for 20 cents a gallon, it was hard for somebody to justify converting their vehicles. Today, when it’s over $2 per gallon difference, it’s very easy to put a pen to it and figure out CNG is the way to go.

JOHN DAVIS: Chesapeake Energy is taking a holistic approach to expanding the market for natural gas. They are working with 3M to use advanced resins in developing lighter and more compact CNG tanks. They are also working to create a “CNG station-in-a-box” that will allow retailers to minimize the expense and complexity of adding CNG to their fuel offerings.

TAYLOR SHINN: A good majority of the stations on America already have a natural gas pipeline below the ground, and so the last 20 feet is what we’re talking about adding. As you see major corporations announce initiatives into heavy-duty trucking, it’s only going to drive the market further.  When you hear announcements from a heavy-duty truck, the engine manufacturers decide to invest more and produce more. And when you see that, the retailers decide they can build more stations, so it’s all a snowball effect, and if we can work at the front end to help the country benefit from that, we’re going to do that.