For the past few years, it seems like every new supercar to come along leapfrogs its hyper-horsepower rivals, trying to lay claim to the fastest top speed. But way back in 1988, one car set a mark of 254 miles per hour that stood for more than 20 years. That car has been out of the public eye ever since, but when the opportunity recently arose, we couldn’t resist taking a swing… with the one and only, Callaway Sledgehammer.

REEVES CALLAWAY: Every car company wants a superlative…right? Fastest, costliest, quickest, what ever.. the superlative in high performance sports cars is top speed. You know, you’re talking to somebody about a car, and the first question is “what’ll she do?” right? And that’s what the Sledgehammer is.

JOHN DAVIS: The Sledgehammer Project was conceived as a rolling laboratory for Callaway to push the upper limits of making power that was both streetable and reliable.

Giving this hammer its mighty swing is Chevy’s tried and true 350 small-block V8, custom assembled by Callaway from hand-picked components, and given an adrenaline shot of twin turbos spooling up to 22 pounds of boost. The power numbers are staggering even by today’s standards:  898 horsepower at 6200 rpm, and 772 pound-feet of torque.

A custom roll cage was installed for safety, but Reeves Callaway insisted the car retain its otherwise stock interior, with air conditioning, stereo, and power seats.

The sledgehammer was driven 700 miles from Connecticut to Ohio for its famous record run, and then driven back home...in the rain, just to prove it was no one-trick pony. 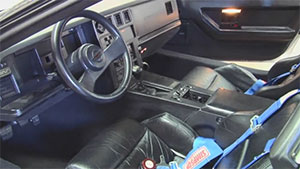 The Sledgehammer’s wind-cheating bodywork was penned by Canadian designer Paul Deutschman, and became the basis for the aero-body used on future Callaway models.

REEVES CALLAWAY: The calculation was so and so much frontal area, so and so much drag, so and so much horsepower necessary to push it through the air at that speed, and we did that. And we went and tested it, and we screwed up. It went 254.76 instead of 250.

JOHN DAVIS: Our brief time behind the wheel was a once-in-a-lifetime thrill, though not a high-speed one. The car now resides in a private collection and is rarely driven. We were speed-limited not by the owner, but by the age of the sledgehammer’s museum-ready tires! In fact, Callaway faced a tire issue in their 1988 speed quest as well. 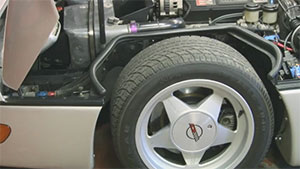 REEVES CALLAWAY: And the request came from GM to Goodyear..saying can you make a set of tires that look exactly like the road car tire… the Goodyear Eagles.. but will be safe at 300 miles an hour.. and Goodyear said ok. They did it, and when we arrived at the test track, they pull off the street tires, put on the special tires..they look exactly the same. Go out and run up to top speed, and the minute that we were done, pull the tires off, put them in the back of the truck, cover them up and go away.

JOHN DAVIS: Those tires reportedly cost Goodyear a million bucks to make. But the real-world R&D, coupled with bragging rights of helping to create an iconic performance legend, was more than worth it. Yes, it’s a pity this old warhorse was put out to pasture, but even thirty years after its incredible run to top speed glory, the sledge still has the ability to outrun most modern machines, and will never lose the race to bring a smile to our faces!