You can tell by looking at our Roadtest week after week that the American public is finally getting serious about fuel economy. But, reducing the use of imported petroleum, and seeking cleaner alternative fuels is hardly a new crusade. For decades, environmental heroes, in groups like the U.S. Department of Energy’s Clean Cities initiative, have been building awareness and demand for clean, efficient transportation alternatives. And, it’s a crusade where all of us are the winners.

Back in 1981 when MotorWeek went on the air, the 70s gas crisis was still influencing car sales and design, and the search for high mileage solutions was in full swing. This period of freewheeling experimentation produced some ideas that were interesting, if not entirely grounded in reality:

The Pough carburetor promised 200 miles per gallon, but as far as we know still hasn’t delivered, and this GM sedan that ran on coal dust was doomed from the get-go! Diesel engines made the grade in economy, but were notoriously slow, smelly and unreliable… a stigma they carried on for decades until the recent advent of clean low-sulfur diesel fuel proved differently. 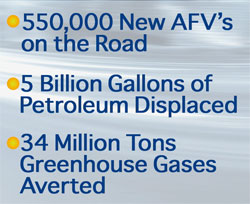 CNG and propane vehicles held promise as clean alternatives, but most were aftermarket conversions and no national fueling infrastructure existed. The GM EV1 pointed the way to a current clean driving technology but made it clear that much work still needed to be done before electric cars could practically roam our streets.

Without large-scale successes to rally around, the alternative fuels movement might have fizzled out, if not for the Department of Energy’s creation in 1993 of the Clean Cities Initiative. This was a groundbreaking network of community-based coalitions, each tasked with encouraging the use of alternative fuels in their area. Starting with just 6 cities in 1993, Clean Cities has now grown to nearly 100 coalitions counting 20,000 stakeholders as members.

For 20 years now, Clean Cities coordinators have been working with fleet managers, fuel suppliers and local governments to preach the clean fuels gospel: appealing to their bottom line by showing how fuel and maintenance costs can be reduced, and selling the environmental benefits as a feel-good icing on the cake.

Each clean fuel convert, from big names like Frito-Lay, AT&T and UPS to small municipalities, taxi companies and refuse haulers… has driven demand for alt fuel, electric and hybrid vehicles and helped to expand the national clean fueling and charging infrastructure to where it is today. 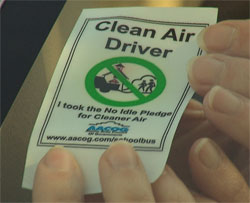 It’s been a winning formula. And the results are impressive: 550,000 new AFV’s on the road, 5 billion gallons of imported petroleum eliminated through alt fuels, cleaner technologies, and smarter driving, and 34 million tons of greenhouse gas emissions prevented from entering the earth’s atmosphere.

ROY WILLIS: The most important thing from my perspective about Clean Cities is: They’re a connector… they connect fuel suppliers, equipment and vehicle manufacturers, with fleets and others that use alternative fuel vehicles.  And those connections I think are primarily responsible for the growth that we have seen, especially in the past 5 to 6 years, in the use of alternative fuels in this country.

JOHN DAVIS: In 1997, only 6% of U.S. transit buses used alternative fuels. Since then, that number has jumped to over 20% and more than half of those are in Clean Cities territories. But despite its tremendous growth, Clean Cities is still very much a grassroots operation at heart, celebrating victories one ribbon-cutting at a time, and relying on each other for much needed support.

DENNIS SMITH: The strength of Clean Cities has always been the teams and the partnerships that form. Both in local communities and across the country. By working together, we’re able to accomplish things that no single company or government agency could possibly do on their own.

JOHN DAVIS: The idea of government empowering local citizens to be agents of change for the common good is an innovative approach that has exceeded all expectations. And if the past 20 years is any indication, the Clean Cities Coalitions will continue to lead the charge for energy change.