With extended driving ranges, dependability, low maintenance, quiet operation and zero emissions, today’s electric vehicles are a no-compromise clean transportation solution for many households. And those same qualities are finding fans for EV’s among some pretty demanding fleets as well. Two in particular that we’ve found, show that going electric can help protect and serve our nation’s most valuable resources.

The United States Park Police was created by president George Washington in 1791, and is charged with protecting our nation’s monuments and landmarks in our national parks as well as in the metropolitan areas of Washington D.C., New York and San Francisco. 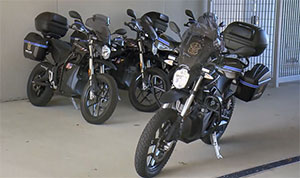 To help in this mission, more than a dozen all-electric cars and motorcycles have recently been added to their Washington D.C. fleet.

Made possible through a long-standing partnership between the national park service and the U.S. Department of Energy, these high performance, high efficiency, and whisper quiet, zero emission vehicles will transport officers and staff in and around the properties managed by the park police.

STEVEN BOOKER: Well our patrolmen love it. They like the multi-terrain use of the vehicles, they’re very intuitive, they can really just roll into a situation when we’re dealing with large crowds. And they can easily monitor and it’s been very well-received by the public. They always come up and ask, those are some nice looking bikes.

In addition to the zero motorcycles, the U.S. park police added 5 Chevrolet Bolts to their fleet. These don’t currently serve as patrol cars, but still play an important role as critical administrative transport for court appearances, personnel movement, deliveries and the like. 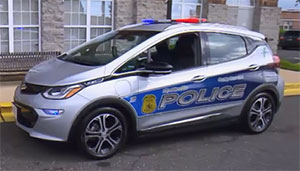 The Chevy bolts and electric motorcycles will significantly reduce the agency’s operating and maintenance expenses, since all replaced aging, less efficient vehicles. Along with charging stations installed at multiple locations throughout the region, all are made in the U.S.

This real-world use of advanced vehicle technology will serve as an example to other police and public service fleets seeking to do the same and will be seen by millions of park visitors each year.

STEVEN BOOKER: One of our strategic themes is effective use of relevant technology. It’s not necessarily new, but the technology here is sound. We understand it, we appreciate it. And it will help the environment as we patrol around the monuments and memorials, and we feel it’s the best direction for us. And, just putting our small footprint into electric vehicle technology is huge for us, as an agency.

For the city of Hyattsville, Maryland a very similar situation unfolded, but in this case the vehicle’s roles were somewhat reversed.

RICHARD HARTNETT: In 2016, the end of 2016, Chevrolet announced the upcoming Bolt, with a range, a minimum range anyway, of 238 miles, and I knew that that would be the car that would, uh, target vehicle for law enforcement, so I looked to get a car like that for the police department, and with the help of a grant from the Maryland Energy Administration, we got this 2017 Chevrolet bolt, outfitted it, and so far it’s been doing great. 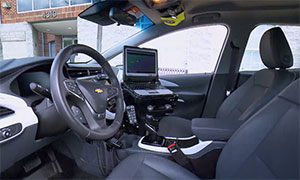 The Hyattsville police also acquired a zero electric motorcycle to provide pedestrian-friendly, quiet, go-anywhere capability in the town’s parks, bike paths and public areas, and have enjoyed the same success as the U.S. Park Police, on a more limited scale.

But the Chevy bolt has been the EV workhorse in this fleet. It has now delivered more than two years of trouble-free, emissions-free service, and saves over 75% in operating costs for energy and maintenance versus a conventional gas-powered police cruiser.

Despite its small stature, this “little EV that could” is making a big case for others to follow Hyattsville’s green lead.

RICHAED HARTNETT: The zero to 60 is very good though, it’s a little over 6 seconds, 6.4 seconds, so it’s actually a little faster off the line than pretty much all of our big, heavy, gas-powered police cars. But to be honest with you, we’re in an urban area, there’s police cars practically on every corner, so if a chase does happen, there’s going to be a lot of other police officers involved very soon, and to be honest with you it’s kinda hard to outrun the radio.