Wireless internet and cellular phones have allowed us to stay in touch wherever we roam. For electric cars, though, cutting the cord goes beyond mere convenience and opens up whole new horizons in personal mobility.

With more and more plug-in electric vehicles hitting the market, EVs are leaving the “early adopter” stage and becoming mainstream fixtures on U.S. roads. Electric vehicle drivers enjoy the quiet operation, low fuel cost and convenience of not visiting gas stations, but many wish there was an easier way to charge their cars than constantly wrestling with high-voltage power cords. 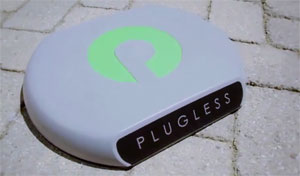 Imagine pulling into your garage or parking space and having your electric car begin charging automatically, while you go about your business. Did you miss it? Because that’s what this Cadillac ELR driver just did. Of course, she has a small advantage over you and me: Rebecca Hough is the CEO and co-founder of Evatran, one of the first companies to bring wireless EV charging to U.S. consumers.

Rebecca Hough: Wireless charging is all about making the recharging process for an electric vehicle owner convenient, simple and hassle free. So instead of having to physically plug in the car, you simply pull over our system and automatically begin recharging. Instead of having to come home and start a new routine that you’re not used to, you simply drive home, you get out of your car and you go inside just like you typically would with a traditional vehicle.

The technology behind plug less charging is called inductive power transfer, and has been used until now to charge small devices like electric toothbrush and some cell phones. 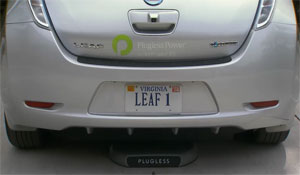 Charging is enabled when the vehicle-installed receiver plate is aligned with a transmitting coil housed in a manhole-sized parking pad placed on the ground. Magnetic resonance allows electricity to pass over the air gap between the ground and the car with minimal loss of energy efficiency, but charging might take slightly longer to accomplish than with a comparable wired level 2 system.

A wall or pedestal-mounted control panel has indicator arrows to help guide the driver into proper alignment, and even gives a score to rate how they did.

The parking pad is strong enough to drive over and is not affected by rain or even snow.

Evatran’s system allows full use of the vehicle’s onboard charging timer and phone apps. The corded charge port remains fully functional when needed, but the two systems cannot be used at the same time.

Toyota, Hyundai, Nissan and others are all working on OEM wireless charging systems, and key research and testing is taking place at the department of energy’s Oak Ridge and Idaho national labs, but it’s important to note that wireless charging standards are still being developed, so the field is still evolving. 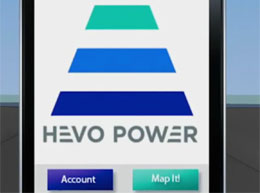 Hevo Power, a New York based start-up, has developed a wireless charging system aimed at the growing number of electric and hybrid fleet delivery vehicles, specifically in cities and urban areas. Hevo’s system allows for a taller air gap of up to 12 inches, needed to accommodate the higher ground clearance of heavy trucks. 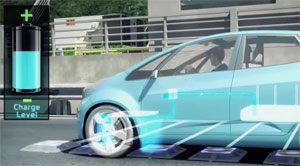 Looking further down the road, the hope is to imbed inductive charging technology into the road itself, allowing electric cars to charge while they drive in specifically wired lanes, and potentially reducing the size of the vehicle’s onboard battery.

Rebecca Hough: We’re already involved in projects that are looking at dynamic charging. One question is the technology the second question is implementation. So it is an extremely complex problem but technically we do believe it’s feasible for a car that charges down the highway.