We’ve watched how in only six short years, the all-electric car has progressed from auto show concept to a Middle America commodity. But, even with that, electrified cars of all types, pure EVs and plug-in hybrids, still make up far less than 1% of new car sales. So we have to ask. Will EV technology ever have a significant impact on the car market as a whole? To find out, we took a good long look at the electric vehicle’s current “state of charge”.

A few years ago the all-electric Nissan Leaf and range-extending Chevrolet Volt had the plug-in playing field pretty much to themselves. That pair still tops the EV sales charts, and Nissan alone has sold 70,000 Leafs to date, but they’re now feeling the heat from a slew of new plug-ins across all price ranges and body styles. 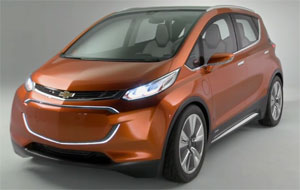 In fact, Chevrolet’s battery-electric bolt, due out next year, may be a game changer with an expected 200-mile all-electric range and a price of $30,000 after federal tax credits.

PAM FLETCHER: If we think about it, our goal here is to increase adoption, and so when you take away range anxiety, which people have told us is their number one concern with battery electric vehicles,..we’ll address that with 200 miles, at an affordable price point, at that $30,000 price point.

JOHN DAVIS: Carmakers are investing heavily in advanced battery research, and each seems to have its own EV strategy.

And don’t think it’s all about fuel efficiency: three of the most stunning performance cars on the planet, the La Ferrari, McLaren P1 and Porsche 918 Spyder…are all plug-in hybrids that maximize their performance by using the instant-on torque of electric motors. 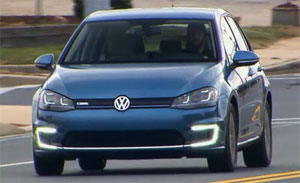 But, driving electric no longer means being a show off. More and more manufacturers are including a plug-in option as just another powertrain for a mainstream model. The Kia Soul, Ford Focus, Hyundai Sonata, Fiat 500, and Honda’s Accord and fit all offer electric along with petrol powered versions, and Volkswagen even offers a trifecta of gas, EV, or diesel powertrains in the golf.

JOERG SOMMER: The Golf platform offers us the ability to not only derive new concepts and other vehicles from that platform, but also to use alternative and multiple drivetrains on that platform. It makes economic sense, consumers are asking for alternative drive in all kinds of segments, and with the golf.

JOHN DAVIS: But you have to give it to Nissan, who took the plunge early and went all-in with the all-electric leaf. This bold step turned a receptive audience, into EV evangelizers. 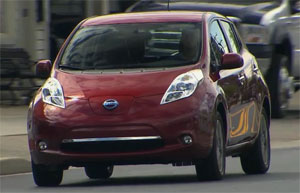 PIERRE LOING: Now, we’re getting into, I would say is a second wave of customers which is much, much closer to your average market standards, so customers who are looking for savings, who are looking to use the leaf as their everyday car, all the time.

JOHN DAVIS: Still, range anxiety, or the fear of running out of juice short of the nearest electrical outlet, is the number one hurdle to truly widespread consumer acceptance of plug-in vehicles. And there’s only two ways around it: make the car go further between charges and… build more charging stations.

Some EV makers are tackling the infrastructure issue head-on. Tesla is setting up its own network of level 3 “superchargers” along popular travel routes.  They’ve also offered restaurants and hotels free chargers so they can attract Tesla and other EV owners. Nissan’s novel “no charge to charge” program is giving Leaf owners a two year freebie. 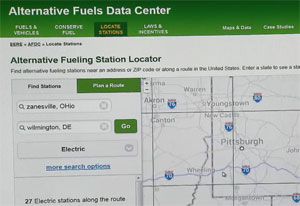 The US Department of Energy’s alternative fuels data center website lists more than 9,300 electric stations, and 23,000 public access charging outlets in the U.S. And will even map a route for you to take advantage of them.

Consumers have shown they are willing to embrace clean power technology. And, with an expanding array of plug-in and pure-EV models and ever-longer driving ranges, backed by superior warranties, it’s clear the electrification of new cars and trucks is here to stay. In fact, we’re sure the day will come when plug in electric vehicles are seen not as the best alternative but as the best choice… period.