With automotive technology evolving so rapidly, training the next generation of vehicle engineers can no longer be limited to traditional classrooms and books. Real-world, hands-on experience is crucial, and that’s why collegiate automotive engineering competitions, like EcoCar 2, are more important than ever. The 2014 edition is now complete, so let’s tally up the results.

ECOCAR 2 is a 3-year competition in which 15 North American college teams were challenged to reduce the environmental impact of a Chevrolet Malibu sedan while retaining or enhancing its utility, safety and performance. 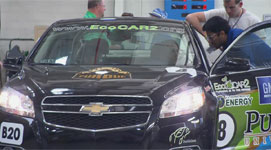 Not surprisingly, all teams chose some form of plug-in hybrid architecture, but an impressive variety of configurations emerged, including machines powered by e85, biodiesel and even hydrogen.

KRISTEN DE LA ROSA: In a collaborative environment, we can present all of the different engineering challenges, and so we can teach teams how to build the “no compromise” vehicle that people actually want to buy. So not just energy efficient, but also performance, consumer acceptability, all those things that influence people’s choices about the kind of vehicles that they want to buy. And that’s where you really see the petroleum production numbers that we’re looking for as a country. 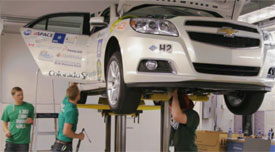 JOHN DAVIS: After a year of modeling and simulation, teams were given their vehicles for year two, and have worked ever since on implementing their designs. But the students also had to think “real-world” in terms of packaging their components for fit and finish, drivability and consumer acceptance.

Headline sponsor General Motors provided the vehicles as well as mentors for each team, and encouraged the competitors to mimic its global vehicle design process, by which GM develops its own prototype vehicles.  They also hosted all 15 teams for this year’s finals at their proving grounds in Milford, Michigan.

The US Department of Energy pitched in their own expertise and organizational muscle, with engineers from their Argonne National Lab managing the competition, providing logistical support and utilizing their well-to-wheels analysis model to assess each team’s environmental impact.

Judging is conducted after each year of the competition, measuring progress in terms of emissions, economy and component integration, as well as pure performance. And no matter what their results, the prize for the students in terms of knowledge and experience has been invaluable.

JIM KOLHOFF: What we see most coming from the competition is the fact that the students who come out of EcoCar are well trained in the automotive industry, they know the techniques, they know the technical challenges, they come to our company, General Motors, hitting the ground running, they’re delivering innovation very early in their career, some of which may have been derived from what they learned at EcoCar. 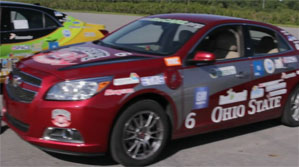 Many innovative ideas have emerged from the competition and no two cars turned out alike. But amazingly, all fifteen teams produced a drivable, nearly-production-ready vehicle --- imagined, engineered and built solely by college students.

Best of all, lessons learned in this classroom will benefit all of us as we look towards a clean driving future!