Juicing up at home is now a given for most electric vehicle owners, but the infrastructure for destination charging -- at work, while shopping and even on vacation – is rapidly expanding as well, making it easier than ever to make EV’s a go-anywhere vehicle of choice. 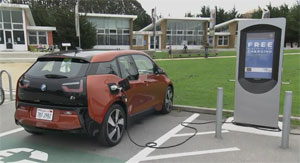 The number of public access EV chargers in the U.S. has jumped from less than five hundred in 2009, when Federal Recovery Act grants began spurring EV infrastructure development, to more than 42 thousand charge ports at 16 thousand locations in 2017.

The vast majority are level 2, 240-volt chargers. These use a standardized connector, compatible with all mass-market plug-in vehicles, and typically charge at 4 to 7 kilowatts, adding about 26 miles of range per hour.

Many public chargers are free to use, with a municipality or business covering the cost in order to attract visitors and encourage EV use. For those that require a fee, users may pay by the session, by the kilowatt-hour, or sometimes an all-you-can-use subscription.

Car companies are also supporting charging convenience: BMW and the national park service have teamed up in honor of their respective 100th anniversaries to install up to 100 EV charging stations, donated by BMW, in or near our national parks.

The U.S. Department of Energy is serving as a technical adviser and will make these chargers easy for travelers to find in their online national station locator tool and smartphone app. 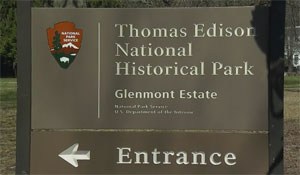 The first of these chargers has been installed, fittingly enough, at the Thomas Edison National Historical Park in New Jersey.

TOM ROSS: “We’re standing here at the garage where, uh, he had very early electric vehicle charging station, circa 1904. He owned a number of electric vehicles and of course, his interest in the electric storage battery…  …is well noted, and he spent over 10 years and 2-1/2 million dollars working on these batteries to improve the electric vehicle.”

JOHN DAVIS: The ability to charge at work can potentially double the practical commuting range for an electrified vehicle. Many public parking garages have EV charging equipment, while more and more private companies have added multiple chargers in their lots to encourage EV use among their employees.

Vacation or inter-city travel means going beyond the predictable routes of everyday commuting, and presents a whole new set of challenges for plugging in. In this case, level 3, direct current fast charging, is the most desirable option. Too expensive for most home installations, a typical level 3 charger delivers 40 to 60 kilowatts of power and can provide an 80% charge in just 20 minutes. 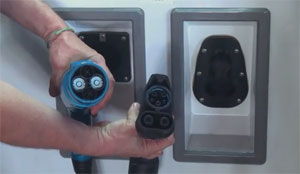 Not all plug-in vehicles can accept fast charging, and there is also an issue of incompatibility between Chademo and SAE combo connector, the two types of fast-charge interfaces used by EV makers. For now, they coexist as a kind of dual standard that will likely continue for some time.

A third type of charge plug is used by tesla for their proprietary one hundred twenty kilowatt supercharger network. There are now about 2600 superchargers nationwide, but tesla plans to double that number by the end of 2017.

Conventional fast-charge outlets are on a similar pace for expansion, with numerous programs in the works. For instance, Nissan and EVgo have partnered with the state of California on “Drive the ARC”, an advanced recharging corridor demonstration that is installing 50 fast chargers on popular routes between Lake Tahoe and Monterey, and they have announced a similar program on the east coast, linking Washington D.C. to Boston.

It’s also worth noting every EV comes with a level 1 120-volt charger, and many businesses and hotels will happily allow you to plug in for free. So virtually everywhere you want to go, charging power is likely nearby. While the U.S. fast-charging infrastructure is still in its adolescence, it is growing fast to meet demand... And giving those that want to hit the open road gas-free, good reason to get charged up for driving electric.