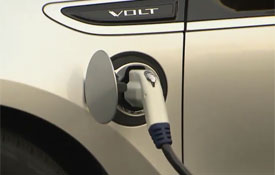 The mass-marketing of plug-in electric-drive vehicles has depended on the promise that an infrastructure of charging stations will be developed to keep these cars humming along. Now that Tesla, Nissan, Chevy, Ford, Fisker and others are selling plug-in vehicles in near mainstream numbers, it’s time to look at the U.S. charging network and see if it’s kept pace.

Nearly everyone who owns a plug-in electric vehicle has some capacity to replenish the battery at home, either with a dedicated 220-volt charger, or by overnight trickle charging from a standard 110-volt outlet.

Less than 350 plug-in electric vehicles were sold to commuters here in 2010, and those Early EV adopters found themselves range-limited by a nearly non-existent public charging network. But in just the past 2 years, more than 56,000 plug-in vehicles have been sold in the US, and over 4700 public-access charging stations have been installed to support them. Public and private investments in the EV infrastructure will keep that number growing well into the future. 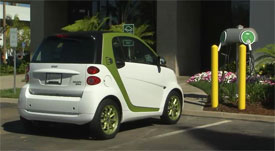 The American Recovery and Reinvestment Act of 2009 placed a big emphasis on the deployment of electric drive vehicles and provided millions of dollars in funding for the installation of public and residential EV charging stations nationwide.

By design, the plan for EV charging initially keyed in on commuter destinations where cars park for long periods of time, such as office buildings, airports, hotels and shopping centers. Most public-access chargers are free to use – at least for now. Fee-based networks are popping up, though, and this entrepreneurial investment is likely to drive the bulk of future development.

Like everything else in modern society, there’s a number of smart-phone apps for finding available chargers: Plugshare lets registered users locate the nearest available charging station, even those at private homes. 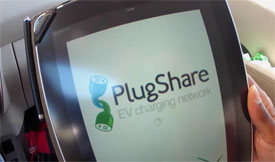 JONATHAN SLADE: We put a charging station in at our house…  and so, once you put your charging station on there and allow other people to use it, you can use everybody else’s charging station that’s listed on there.  …it’s so cool because while we were driving across the state of Maryland, my wife logged into Plugshare and there was a new review “blip” that popped up and it said ’a review of a new home charging station’, and it was ours!

JOHN DAVIS: Plug-in vehicle owners we’ve talked to mostly agree that the number of charging stations available now is keeping pace with their demands, and plug-sharing has even fostered a newfound sense of community for many owners..

JONATHAN SLADE: ...You meet a lot of other EV owners at these charging stations and everybody’s been terrific sort of trying to figure out who needs to charge the most to get where they’re going.

JOHN DAVIS: But EV drivers also point out that more quick-charge options are needed, especially along interstate highways and away from urban areas. While point-to-point driving works for many, the flexibility to venture further afield is crucial if electric cars are to become truly mainstream.

BILL CLARKE: Somewhere where it’s convenient to stop for a half an hour or an hour, where you can have lunch or dinner…and replenish your car also. I think rest stops would be most likely to be the type of spots where you’d want to have additional charging stations. 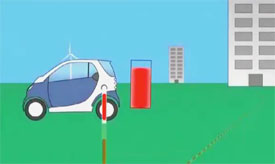 JOHN DAVIS: And what about the future of electric car charging? So-called Vehicle to Grid Systems are being field-tested now, in which electric cars can be used as energy storage devices and actually feed power back to the grid during times of high demand, then be recharged at off-peak hours.

The electric power supply-and-delivery network in the U.S. already has the capacity to meet our short and long-term transportation energy needs. It’s encouraging that the EV charging infrastructure is growing on pace with current EV sales, and it looks poised to keep American EV drivers all charged up for years to come.