As little as five years ago, the thought of plug-in EVs and hybrid vehicles becoming commonplace seemed implausible. But, plug-in cars like the Volt, Leaf, Prius, Tesla, and Fisker are now in the mainstream; and a public infrastructure for charging them is rapidly emerging. And, just like enthusiastic car owners before them, plug-in early adopters like to get together to share tales on how this new technology has changed their lives. So come along as we eavesdrop on the latest chapter of the American automobile love affair.

JOHN DAVIS: On any given weekend, somewhere you’ll find a gathering of cars and a group of enthusiasts assembled around them. Be they hot rods, classics or sports cars... each genre of the car’s evolution has developed a loyal following, and electric cars are no exception. The recent National Plug-In Day included events held at hundreds of sites across the U.S., enticing EV aficionados to check out the latest models and share their passion for gas-free motoring.

JIM BARRACCA: The dealer gives you 9.3 gallons, I haven’t used all of that yet. But when I get 3 gallons low, I put 3 gallons in, so I’m still at almost a full tank… Last time I put three gallons in was February, and this is September 23rd.

JOHN DAVIS: All of the owners we talked with were pleased with their plug-in car’s fuel economy, and many routinely exceed government fuel economy estimates. Of course, using zero gasoline is an ultimate goal for the environment and the bottom line.

BILL CLARKE: The money that I am paying for electricity is about a third of the price of gasoline. 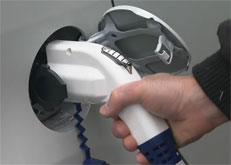 JOHN DAVIS: For some, owning an extended-range EV like the Chevy Volt means not having to compromise their daily routines.

PAUL MICHALSKI: I like the game of it, it encourages you to get as much out of the battery as possible, so I play that game, but I also drive it like a car, and you know, if I don’t have time to do that, then I don’t.

JOHN DAVIS: Others appreciate the electric motor’s performance as much as its economy.

RANDY KUNING: I get the most fun when I do the parking lot grand prix next to a Corvette. Now ok, I’m not going to beat them past 30 miles per hour on acceleration, and most of the time I just caught them napping anyway, but still there’s a sense that they’re seeing the Volt nameplate on the rear panel disappear into the distance.

MIKE NATALE: People don’t understand that they are fun to drive, they’re responsive to the accelerator, and they’re good size..most of them are good size cars and handle well.

JOHN DAVIS: College professor Jonathan Slade and his wife took the plunge to a full- electric Nissan Leaf, and found it has induced some positive lifestyle changes. 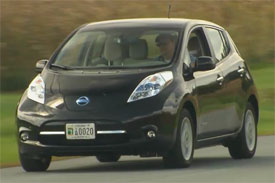 JONATHAN SLADE: It really rewires your brain in some interesting ways if you actually let it. Before we had a fully electric vehicle, we used to end up shopping at convenience stores on the way to and from work to buy a lot of groceries like a gallon of milk or a loaf of bread or butter, what not. Of course, that’s like the least efficient way to buy it... Now we found a grocery store near where I work that has a free electric charging station. We plug in there and end up doing our shopping for an entire week or two weeks there. We get better prices and we’re charging for free using 30 to 50 cents worth of electricity in the parking lot while we’re in the store buying groceries... Everybody talks about range anxiety and they’re all concerned about it. Our sort of solution to that is drive the heck out of the car. The more your drive the car, the less range anxiety you have. And so you drive somewhere once or twice with a full charge – hey I can make it there and back and you don’t think about it anymore. 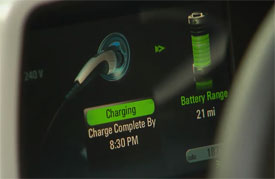 JOHN DAVIS: The Slades even used their summer vacation this year to push their gas-free driving boundaries.

JONATHAN SLADE: ...And so I convinced my wife to take our summer vacation and actually attempt to drive all the way across the State of Maryland, from the westernmost mountains all the way to Ocean City... We drove the heck out of the car when we drove it across the state and we would literally pull in and plug-in and then go to a diner nearby, go to a restaurant, eat, and do a little tourism, go to museums while it was charging and then come back and we would go. So there was very little sort of like –waiting around for it to charge, so you had to be kind of strategic to figure out where to plug in where there’s something to do for 2-3 hours.

JOHN DAVIS: Opinions are split on whether pure-electrics, range extenders or plug-in hybrids will be the preferred EV platform to help drive us into a petroleum-free future. Our guess is that all three types will find favor depending on their owner’s needs, but it’s clear that plugging-in is charging up a new era of auto enthusiasm!