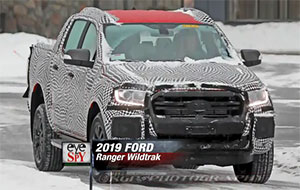 As if there weren’t enough anticipation surrounding the arrival of the 2019 Ford Ranger mid-size pickup, it looks like Ford is already increasing its impact. Our spy photographer caught what appears to be a Ranger Wildtrak prototype in Michigan. This has been the luxury, off-road Ranger in other markets.

Still, it’s not as raucous as the full-on Ranger Raptor recently unveiled in Asia. This Americanized Wildtrak includes buttresses behind the C-pillar, higher bed sill extensions, and orange stitching inside. Our spy photographer points out this rig is a diesel, although Ford has only confirmed a 2.3-liter Ecoboost (EE-CO BOOST) for our Ranger so far. Clearly Ford has expanded plans for its smaller pickup once Ranger production begins here late this year.