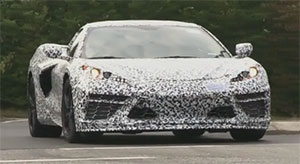 STEPHANIE HART: We’re crazy about Corvettes here at MotorWeek. A radically new one is coming… and we’ve been waiting a long time for this.

Our spy spotted the 2020 Chevrolet Corvette testing at Germany’s famous Nurburgring. Though camouflaged its clear this C8 is the first production mid-engine Corvette. LEDs light the front while below the round taillights sit split quad exhausts. Big side scoops will be gulping in lots of air. No hard facts yet on the power plants, but we expect both normally aspirated and turbo V8s. We anticipate the C8 to officially arrive in January at the auto show in Detroit.