Rumors have been swirling that there will soon be a new member of the Corvette hierarchy…now it appears we have some proof. 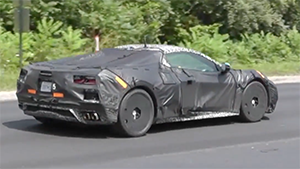 Our spy Photographer spotted GM engineers testing five prototypes of its upcoming Corvette E-Ray performance hybrid alongside the current NSX and its high-performance hybrid system. Spys say the sound of the C8 E-Ray seems to support reports of the new vette variant’s electrification, intensifying the car’s current 6.2-liter V8 engine. As far as style, the C8 has a new, more aggressive look. Chevrolet has announced a Fall unveiling for the C8 Z06 model. No mention of the E-Ray’s debut, or even if it’s really headed to production…a lot still remains a mystery so stay tuned.