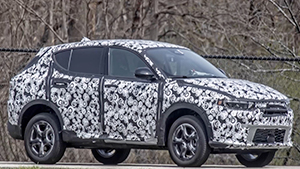 This prototype appears to be based on the Alfa Romeo Tonale, another crossover utility under the Stellantis umbrella. If so, it will likely use the same plug-in hybrid powertrain; a turbocharged 1.3-liter inline-four.

Thanks to the swirling camo-wrap, we can’t see a plug-in port anywhere; but the side profile shows the greenhouse shape-- nearly identical to the Tonale’s. Proportions are similar, too, with biggest differences being the sharpened headlights and more Dodge-brand appropriate front face.

We expect a formal reveal in the near future, and we’ll cover it right here on MotorWeek!