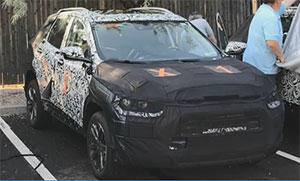 Stephanie Hart: The hot subcompact crossover market is getting a little more crowded. Our spy photographer caught these shots of what’s believed to be the GMC Granite. We spotted it being tested in Arizona. MotorWeek saw the concept when it was revealed at the 2010 North American International Auto Show in Detroit. Back then, GMC called it an “urban utility vehicle” with an industrial look aimed at young professionals. We expect power to come from a 1-point-4-liter turbocharged four-cylinder matched with a six-speed automatic. Even with the camouflage, this appears to be a little less boxy than the concept. We could see the GMC Granite sometime in 2020.