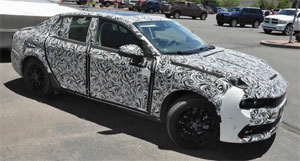 China’s automotive ambitions in the United States are coming closer to reality. Our spy photographer caught the Lynk & Co. 03 compact sedan testing in Colorado. It looks similar to the concept that debuted at Auto Shanghai a few months ago. China’s Geely owns the brand, as well as Volvo, so the 03 is be based on the same Compact Modular Architecture as the forthcoming Volvo 40-Series redesign. Powertrains will also follow the latest from Volvo. From what we’ve seen, the 03 resembles the Lynk & Co. 01 compact crossover which could be on the street in China next year. Both vehicles could be in the U.S. not long after that.