FLASHBACK ANNOUNCER: From our Motorshop, a step by step guide, to oil and filter changes. And as every week, a look into the future with What’s New on Wheels. 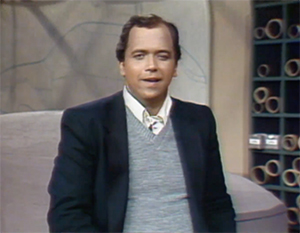 FLASHBACK JOHN DAVIS: Welcome to MotorWeek, I’m your host John Davis, I’m glad to have you with us.

JOHN DAVIS: In 1978, I pitched the idea for a car show to my bosses at Maryland Public Television and we did a pilot episode. But it didn’t get the go ahead until the summer of 1981. With only 12 weeks before being on the air, the first challenge was finding the right people.

I knew everybody on the staff was going to have to wear many hats: TV producer, test driver, actor. I had a building full of TV pros to pull from. But, to help whittle it down, I looked in the parking lot to see what everyone drove!

Based on that, Craig Singhaus was an easy choice. He drove a Shelby Mustang!

CRAIG SINGHAUS: Hey, so you can call me Uncle Sam, haha get it? Uncle Sam, have a complimentary American flag.

JOHN DAVIS: Joyce Braga, our first news reporter, drove a Porsche 924, so I knew she had potential!

There was a pool of us that had been chatting about it since the pilot, and a lot of those folks came on board right away because it was a chance to do something new and fun.

JOHN DAVIS: Those early shows were really a learning experience. We were all car enthusiasts, but had never actually tested a car before. 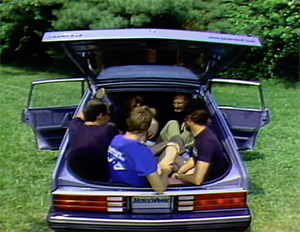 So, we basically taught ourselves how to lay out a slalom, to measure braking. We’d read about how the car magazines did it. We’d watched engineers do it on video. So it was really just a matter of doing the test in a scientific fashion, but also making it look good for television.

Our first track was the seaplane ramp at Martin State Airport in Baltimore, and if you goofed up in the slalom, you could either go down the ramp toward the river, or into rows of parked transit buses.

After a brief stint using a yet-to-be-opened highway, we moved to 75-80 Dragway near Mount Airy in 1982, and are just now transitioning to a new testing site at Mason-Dixon Dragway in Boonsboro.

Because the early episodes had fewer feature segments, we had the luxury of time in the road tests to show details like the location of the spare tire, where to check the fluids, and also time to have a little fun.

FLASHBACK JOHN: And just in case you want to drive the Guiness Book of Records, the Phoenix luggage bay will hold up to 9 unsavory characters. Again, more than any other.

JOHN DAVIS: As the cars have become more sophisticated, so MotorWeek has evolved to keep pace. Those first road tests were over 8 minutes long, and had less than twenty-five edits.  Now, for a five-minute test, we’ll use three times as many shots. 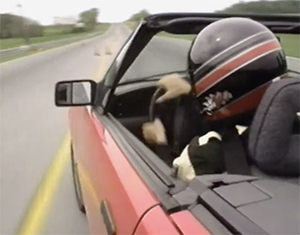 And that was made possible by evolving camera technology: we were already mounting small point of view cameras on cars 15 years before the GoPro was invented. Now along with DSLR’s, drones, dollies, and sliders and even cell phones capable of high-definition video, the creative possibilities are endless.

Above all, I've been fortunate to be surrounded by top-notch professionals behind the scenes... some for more than thirty years!

We’ve never had a big Hollywood budget or a cast of hundreds, but that never slowed us down or compromised our commitment to making the best show possible.

And I'm proud that so many of our staff alumni have gone on to work for other media and car companies like Chrysler, Porsche, Jaguar, GM, and Volvo.

So, despite monumental changes in both the automotive and video industries over the past 40 years, the same concept from day one still drives all of us today...at MotorWeek, the cars are the stars!