Most enthusiasts see the 1970s as the “dark ages” of American performance, blaming government regulations for taking all the fun out of cars. Well, our Joe Ligo ventures into that darkness and discovers a Chevrolet holdout you may have never heard of.

While buyers loved their muscle cars, the effects of Detroit's horsepower wars made Washington put the brakes on the auto industry...

By the early 70s, the muscle car market was dying. The cause? Increased prices for fuel and insurance combined with government regulations for safety and emissions. By 1975, all that remained were a few last gasps.

While it may not induce heavy breathing, this 1975 Chevrolet Chevelle Laguna Type S-3 tries to carry the torch of its muscle car ancestors.

The downsized 3rd generation Chevelle debuted in 1973, and the Laguna Type S-3 model followed a year later, replacing the Chevelle SS at least in spirit. The unusual plastic shovel-nose Laguna followed in '75.

Although Chevy didn't officially support racing, the Laguna was clearly designed for NASCAR. That aerodynamic nose helped it dominate the track, winning two Winston Cup Championships before the league caught on, and banned this limited-production aero model from competition. 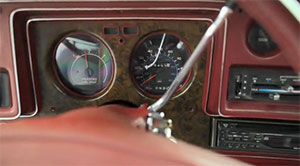 This street-legal version has window louvers, rally wheels, and all those things that look fast, but don't actually improve performance.

0 to 60 takes well over ten seconds. So, it's no Super Sport. This car's 3 speed automatic transmission doesn't help either.

There seems to be a dead spot over 30 miles per hour where you stomp the pedal and the car gets louder, but it doesn't go any faster. Finally it triggers a downshift into second and things pick up a little bit, but it's not exactly a white knuckle experience. 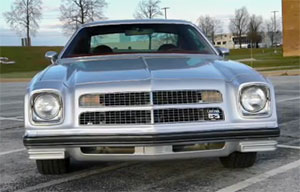 Blame it on this 350 cubic inch V8 that only makes 145 horsepower. It's a good engine, just strangled by early pollution-control equipment. A 400 cubic inch small block was optional in 1975, but added just 30 more horses. Collectors say a 454 big block was available, but GM doesn't officially list it in the brochure.

Perhaps GM compensated for the loss in performance with an increase in luxury. Either way the Laguna's slow sales caused Chevy to drop the model after 1976.

The Laguna Type S-3 will always stand in the shadow of older, more popular Chevelles, but it's an important part of American muscle history.

If you're willing to trade some performance for extra comfort and a NASCAR pedigree, chances are you'll have the only one at your local show.

People still worry about regulations killing off performance cars, but if the past proves anything, manufactures will always find a way to makes cars cleaner and faster than before. And that's a good reason for all of us to breathe easy.