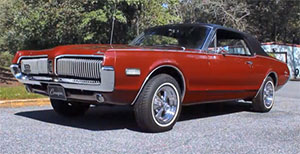 It's been 7 years since Ford Motor company closed up their mercury division. During the Marque's 73-year history, it was mostly known for unexciting, badge-engineered versions of ford brand cars. One of the rare exceptions was the first-generation Mercury Cougar. It may have the bones of a mustang, but as our Joe Ligo shows, this cat “knows where it's at.”

We tend to associate muscle cars with youth, but as the market exploded in the mid 1960s, customers of all ages wanted in on the action. Imagine yourself car shopping in 1968.  All the kids are crazy for Mustangs and Camaros, but you want something a little more mature... Well, Mercury has a car for you, just look for the sign of the cat. And there you would find this dashing 1968 Mercury Cougar. 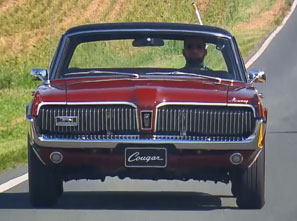 The name “Cougar” was originally suggested for the vehicle that became the Ford Mustang. After the Mustang's wild success, Mercury needed a sporty car of their own, and gave the Cougar name a second chance.

Launched for 1967, Mercury based the Cougar on the Mustang platform, but it had completely different styling and a 3-inch longer wheelbase.

Advertising went all in on the feline theme, even using real live Cougars. The image of a big cat sitting atop a Lincoln-Mercury dealership sign soon became the symbol for the entire division. Potential customers were directed “to the sign of the cat.”

With elegant but aggressive styling, and a touch of European flair, the Cougar appealed to a more sophisticated driver. Features like hideaway headlights and sequential turn signals add a dapper touch.

For a base model Cougar, this interior has a wonderful 1960s feel, but it does look rather spartan compared to the luxurious GT and XR-7 models.

Yes, it's a tad larger than a Mustang, but it still feels light and maneuverable for its age. Even with the smallest 289 V8, this car doesn't feel weak. It's great for just cruising around. But whenever I put my foot to the floor, I can't help but fantasize about that optional 428 big block.

But more power costs more money... According to Hagerty Classic Car Insurance, base model prices between $9,200 and $23,900 seem reasonable, but expect to pay twice as much for a fully loaded XR-7, and up to $150,000 for an extremely rare Cougar GT-E. But with total 1968 production over 113,000 unit, a regular Cougar shouldn't be too hard to catch.

As the muscle car era passed, the Cougar became a softer, more luxurious vehicle with less focus on performance. After a brief rebirth as a sport compact, it left production for good in the early 2000s, with all of Mercury following in 2011.

But for a good 20 years, the Mercury Cougar stood as the symbol for an entire brand, something few vehicles have ever done.  And after driving this 1968 model, I can see why. If you're looking for a “mature” muscle car with a touch of class, you'll find it...at the sign of the cat.