Modern muscle cars make a lot of headlines these days, but we haven't forgotten about the classics, even the most unusual ones. Neither has Joe Ligo, who shares some “muscle car memories” on one of the era's most surprising underdogs.

JOE LIGO: Americans love the underdog. We cheer for the little guy, the long-shot, the dark horse. It's part of who we are. 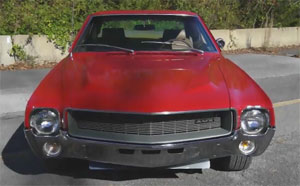 GTO, STI, certain letters mean a lot to car enthusiast, here’s one you may not have heard though…AMX.

This 1969 AMX came from an unlikely source: ultra conservative American Motors Corporation, the little number 4 to Detroit's “Big Three.” During the mid-sixties, AMC tried to shed its economy-car image by clawing into the luxury market, only to get left in the dust of the muscle-car boom. The company needed a performance machine, and in a hurry.

A 1966 concept called the American Motors eXperimental served as inspiration for the upcoming AMC Javelin, which targeted pony cars like the Mustang. But one AMC board member kept pushing for something both more and less…a two-seat version, so five months after the Javelin debuted, the 1968 AMX arrived. All designers had to do was shorten the wheelbase, remove the backseat, and adjust the rear styling accordingly.

Base power was a 290 cubic inch V8. This AMX has the midlevel engine with 343 cubes making 280 Horsepower. Larger still were the optional 360 and 390 cubic inch engines with max horsepower reaching 340, depending on the year. Transmissions choices were a 4 speed manual or 3 speed auto.  Even with the automatic, this AMX feels light and eager. 0-60 falls somewhere between 7 to 8 seconds. No power steering, no power brakes. not a whole lot of accessories on this AMX but I think that’s part of its charm. We forget how spoiled we are by modern cars. There’s nothing really here to distract you. You get to really focus on the car because it’s such an involving experience to drive.

After the launch of the Javelin and AMX, dealers saw record amounts of traffic, especially young buyers. But for all that excitement, the 2 seat AMX only lasted three years. Sales were a fraction of the competitions. With just 19,134 produced before it reached the end of the road. But the AMX had left its mark on the muscle car world and the company reapplied the name on the top spec variants of other models, even though none compared to the original. Although uncommon, the two-seat AMX remains semi-affordable. Depending on condition, Hagerty Classic Car Insurance values this model between $8,800 and $34,000.  However, expect to pay considerably more if you’re looking for the 390 engine and a manual transmission. Not quite a pony car and not quite a sports car,  since the beginning the AMX has defied classification. It’s appeal stems both from its unusual design and unlikely origins. Those three letter A – M – X stand for the little guy. It’s a reminder that sometimes the underdog wins.