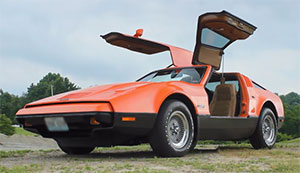 Ford V8 engines have powered tens of millions of vehicles through the years, from the mundane to the insane. Well, our Joe Ligo has found one in a very unusual place. But while the engine may be somewhat common, the rest of the car around it definitely is not!

In many ways, the Bricklin defies classification. The engine came from Ford, the suspension is based on the AMC Javelin, and it has a body of acrylic plastic over fiberglass. Plus, gullwing doors and massive bumpers.

Is it a muscle car? A sports car? Well, I went to the source, creator, Malcolm Bricklin, 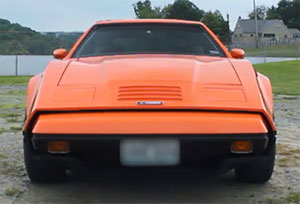 MALCOLM BRICKLIN: “It is a sports car because it looks like one and the low center of gravity so it's fun to drive...but the idea behind it was, safety does not have to be ugly, number one...and that's what SV-1 stands for: Safety Vehicle One.”

JOE LIGO: The SV-1 began as his project to build the world’s safest car, but also make it gorgeous. While other automakers complained about safety regulations ruining their styling, Bricklin's team found ways around this, integrating safety into the design.

MALCOLM BRICKLIN: “So if you look at the Bricklin, there's an airspace all the way around both the front and back bumper, and at 10 miles per hour or less, it goes in and goes out, no damage.”

AMC-powered Bricklins offered manual or automatic transmissions, but the Ford powertrain came with a 3 speed auto, only.

It may be a “safety vehicle,” but driving this superbly maintained example, it sure felt like a sports car. 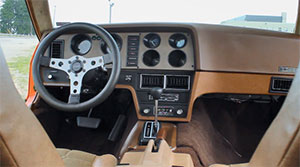 This is the kind of car that just begs you to drive faster.  You know, you see a twist up ahead but you don't want to slow down, because it's so much fun to push it through the curves. And then you remember it's age, it's all the more impressive, because it's not like there were a lot of American cars that could manage this back in 1975.

The only real American competitor was the Chevy Corvette, and it didn't have the wow factor of gullwing doors. In fact, the entire Bricklin body looks futuristic and ahead of its time.

The acrylic panels aren't painted, they're solid color, so scratches easily buff or sand out.

The interior features all the amenities you'd expect for the era, except a cigarette lighter...as Mr. Bricklin thought smoking and driving was dangerous. 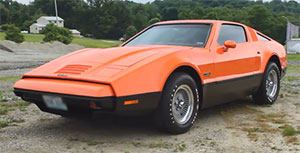 Unfortunately, Bricklin had trouble with money, politics, and all the other challenges any new car company faces. By late 1975, the operation was closed and forced into receivership.

With only 2,906 SV-1s built, “rare” is an understatement. According to Hagerty Classic Car insurance, prices range between $7,200 and $34,900. Only 5% have  manual transmissions, so expect to pay more for one of those.

Whether you call it a sports car, muscle car, or “Safety Vehicle,” the Bricklin SV-1 is remarkably fun to drive, and even more fun to look at.

And although the company is long gone, after driving one, I'd say this car's legacy is very...safe.