The freedom to hit the open road has always been at the center of our love affair with the automobile. But for some drivers and fleet operators, trying to choose a vehicle powered by a cleaner domestic fuel like natural gas or electricity has meant limiting that freedom due to gaps in the nationwide fueling and charging infrastructure.  Well, that is rapidly changing as more and more major highways and roads are being designated Alternative Fuel Corridors, knocking down the final barriers for making clean fuels the best alternative no matter where the road takes you! 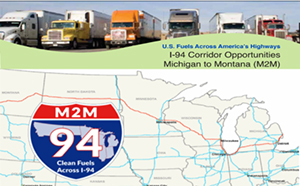 One vital link, the Michigan to Montana I-94 Alternative Fuel Corridor, or M2M, is the result of a joint effort between clean cities coalitions and critical government and industry partners, like the Gas Technology Institute, throughout the Midwest. Funded in part by the U.S. Department of Energy, it runs 1500 miles along Interstate 94 from Port Huron, Michigan at the Canadian border, all the way to Billings, Montana.

It passes through the major cities of Detroit, Chicago, Milwaukee, and Minneapolis, but also countless small towns, and miles upon miles of rolling farmland. The M2M corridor is a vital link for long-haul trucking as well as a prime mover for expanding the use of propane, biodiesel, ethanol, natural gas and electric with regional fleet operators.

SAMANTHA BINGHAM: "This project and projects like it across the country,  help those fleets to expand their use of alternative fuels, to use it along more routes. And then also it helps encourage fleets that aren’t using alternative fuels currently, they can see that these routes are supported and that it encourages them to adopt alternative fuel vehicles and switch out their petroleum-based vehicles."

Compressed natural gas is an affordable and abundant U.S.-sourced fuel that can help to reduce greenhouse gases and other harmful emissions.  Ozinga’s red striped trucks are a common sight around Chicago and northwest Indiana, and since 2013, the company has been converting its fleet of 500 ready-mix trucks to run on CNG.  At the same time, it expanded its own business to become a regional natural gas fuel provider, now operating seven public-access CNG stations in the area, which makes it more practical for other fleets who want to switch to CNG. 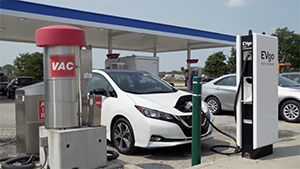 Propane is another popular alternative fuel option, especially with fleets. Along the alternative fuel corridors, uniform signage nationwide indicates which type of fuel is most plentiful. But in our 3,000-mile trek for this story, we found that word of mouth travels faster still.

TIM RAHN: "And there are vehicles out there. We've got 10 or 15 people that stop every single week. Coming through, going to the cabin, coming home..and they support us, they know we have it, it's easy to use, it’s safe to use, and it’s cheap. The last three months we’ve been 80, 80 to 85 cents a gallon cheaper than regular gasoline. It was a diversity, it’s something that nobody else has in this area, and we wanted to be the first to have it."

Schwan’s frozen foods has a fleet of more than 600 propane-fueled delivery vehicles and has also built out their own fueling infrastructure, but smaller fleets, like Groome Transportation, are also reaping the benefits of the M2M corridor.

SCOTT HAYES: "Before, when we ran down to Minneapolis, we would run out about halfway up, so now with this corridor being built out, it’ll give us more opportunities to fill up with propane and we will have the opportunity to run cleaner, longer." 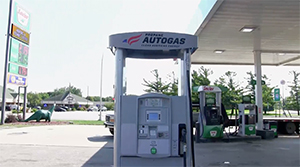 Also included in the Alternative Fuel Corridor designations is the availability of electric vehicle charging stations, especially fast-charging, convenient to the interstates.

The EV charging infrastructure has been expanding rapidly for the past decade.  At the far end of our journey, in Fargo, North Dakota, three new fast-charging sites are coming online, helping to make frontier destinations like these, once considered remote, more accessible and convenient for EV drivers.

CHAD BROUSSEAU: "It’s a win-win, we’re a member-owned electric cooperative, not for profit, so it’s good for the members, good for us, uh, not only is it electric sales for Cass County Electric but an electric vehicle in the right circumstance, can be a money-saver for the electric vehicle owner in reduced operating and maintenance costs."

In the drive to curb emissions and make America less dependent on imported oil for transportation, spurring development of cleaner alternative fuel vehicles and building out a national network of convenient fueling points for natural gas, propane, hydrogen and electric vehicles goes hand in hand.

SAMANTHA BINGHAM: "Also the M2M Corridor really demonstrates that cities and states and utilities and fuel providers and retailers can all work together, across state lines to make this infrastructure, this clean fuel infrastructure, available."

The Michigan to Montana Alternative Fuel Corridor project is fast making these fuels a fine first choice for everyone!