2012’S Hurricane Sandy has had long-lasting effects along the east coast, and compelled many communities to re-evaluate their emergency preparedness plans. Amid the countless tragic tales that emerged from that storm, many positive stories involving the use of alternative-fueled vehicles to aid in the recovery efforts also came to light. And they are now part of a coordinated plan to help cities and citizens nationwide prepare to weather the worst. 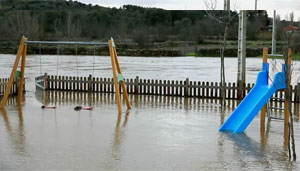 Pelting rain, high winds and surging water pummeled the Eastern seaboard in November 2012 as Hurricane Sandy chewed up the East Coast, leaving in its wake a swath of loss and destruction.

Atlantic City, New Jersey took a heavy toll in physical damage, but thanks to a program begun in 2009, the City’s recovery began more quickly than most.

With help from the US Department of Energy through the Recovery Act, Atlantic City New Jersey’s Jitney bus operators were able to replace their aging fleet of 190 minibuses with new models running on clean compressed natural gas fuel. 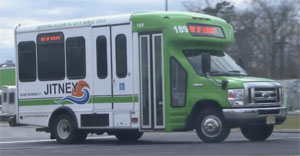 FRANK BECHTEL: “…The bay front properties got whacked real bad. But the boardwalk that was damaged is right over there. The boardwalk actually came up through the force of the storm and relocated itself several blocks…We saw on the news up in New York and Staten Island, I mean people were fighting over gasoline…We never had an issue where a bus couldn’t perform an emergency service or a convenience service because we weren’t going to be able to get fuel. It was a complete uninterrupted- compressed natural gas supply.”

The City of New Richmond, Wisconsin sent this Eaton hybrid utility truck, as part of a mutual aid mission to help with the Hurricane Sandy cleanup. The hybrid powertrain allowed crews to shut down the trucks diesel engine while working to restore electricity to the millions affected by the storm… but aside from the fuel savings, a more critical benefit was to worker safety. 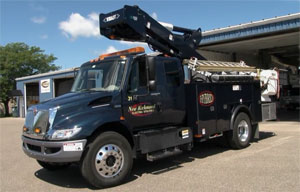 KEVIN BLADER: “You got traffic going by, the lineman might be up 50-55 feet in the air… having a diesel truck…it’s hard to hear over the diesel noise. Whereas, a hybrid, you can actually yell to the lineman, he can hear you, you can communicate a lot better…it’s a huge advantage.”

JOHN DAVIS: As a result of these alt fuel successes, more community planners and Federal and state emergency management agencies are now taking a fresh look at alternative fuels as a key part of their disaster preparedness strategies.

The National Association of State Energy Officials, with help from the Department of Energy’s Clean Cities program, is revving up IREV, or the Initiative for Resiliency in Energy through Vehicles, to provide emergency fleet managers with information about alternative fuels, vehicles and infrastructure, along with strategies for using them in emergency scenarios.

DAVID TERRY: “We saw a need in the transportation sector for emergency vehicles, utility first responders, and other critical infrastructure vehicles to have a diversity of fuel mix. A diversity of fuel mix means they have more options, more opportunities. If gasoline supplies are down, if diesel supplies are down, etc. they can turn to propane, biofuels, electric vehicles, natural gas, and other sources including efficiency, and help strengthen the system, make it more resilient.”

JONH DAVIS: During and after a natural disaster, the need for evacuation, electric utility repair and emergency response vehicles is obvious, but services like trash removal, ambulance transport and food delivery are critical as well.

Through programs like iREV, alternative fueled vehicles to carry out these functions are being identified now so that when disaster strikes, they can be ready to lend a helping hand to those in need.

And with National Preparedness month coming up, now’s a good time to look at your own emergency plan... and plan to be a survivor, not a statistic.