2016 marks the centennial of the founding of the national park service. And as it looks toward the next 100 years of stewardship over our greatest national treasures, the park service is using new ways to engage park visitors and communities through eco-minded recreation, conservation and historic preservation programs.  This includes demonstrating smart ways to reduce the impact of motorized vehicles, all in an effort to keep the parks clean and serene, and to inspire visitors to do the same in their communities when they return home.

The time-honored tradition of road-tripping to a distant national park is still a vacation favorite for many families. And an ongoing national park service initiative, in partnership with the department of energy clean cities program, will allow battery-electric vehicles to reach these destinations as easily as the family truckster. 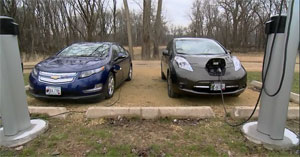 Converting park vehicle fleets to use cleaner fuels and using shuttle buses to move visitors through Grand Canyon national park and many other popular destinations has effectively reduced the amount and impact of vehicle traffic in those parks. Adding electric vehicle charging stations inside the parks is a long-overdue element in the master plan to protect the environment in our parks, wherever they are.

27 parks have EV chargers installed already, and many more are in the works.

In addition to opening up new travel opportunities, electric vehicle owners will no doubt appreciate the extra perk of getting a prime parking space, steps away from the towering redwood forest or that favorite bench along the river.

ADAM MCCORMICK: “I think it’s a good idea, cuz when people come to the park, then they can plug in for a while and just enjoy the park.”

JEFF RIEGLE: “…as far as having something that, you know, connects the national parks to the electric vehicle community, I think it’s a great idea. Up and down the river, I’ve used many of the different parking stations not only from a standpoint of eco-tourism where I’m going and visiting the different parks but also to know that they’re there for when I might need to charge for other reasons…” 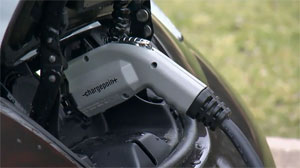 JOHN DAVIS: Most parks will have one or two stations to start, but the Mississippi national river and recreation area in Minnesota has already been “charged up” by this initiative. While 72 miles of the river itself falls under national park service protection, the land around it is a patchwork of state and municipal properties, stretching along the mighty “mississipp” in the area around Minneapolis and St Paul.

JOHN ANFINSON: “…in that next 100 years, we need to clean things up a bit.  We need cleaner skies and cleaner air by bringing the electric vehicles here, in a major metropolitan area, we can get that message out where most people live. Over 80% of Americans live in urban areas, this is where the national park service has to get to people.”

JOHN DAVIS: These public and private entities have partnered to install 11 ev charging sites, along 54 miles of riverfront, and opening up this urban gem to Minnesota’s burgeoning plug-in vehicle population.

TYLER FAHNOW: “So, using chargers wherever you go, chargers in national parks, chargers at the grocery store, very convenient. It’s nice to be able to just plug in anywhere you need to, because you don’t need to necessarily, you know, gorge on power overnight and have the whole thing. You can do these little charges here and there, here and there, and continue your day on.”

JOHN DAVIS: Part of the fun of exploring our national parks is discovering the fascinating history of our country, and a visit to the Thomas Edison national historical park in New Jersey held particular interest to us for this story. 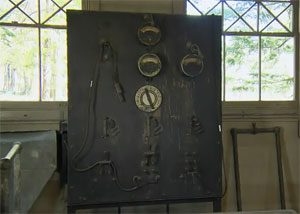 Housed in the garage at Edison’s Glenmont estate is the granddaddy of all ev chargers, designed by Edison himself to power up his personal fleet of electric vehicles, including this early 1900’s locomobile, which Edison converted from steam to battery power. This car was reportedly a favorite of Mrs. Edison, as it was easier to start and operate than the gas-powered cars of the day.

Think of what might have been: if not for the invention of the self-cranking starter motor, we might all be driving electric cars today. One more reason to get out there and visit one of our great national parks this year, and wish it a happy hundredth birthday while you’re there…