We drive some pretty lofty cars around here. And while we generally have a rule about keeping our feet and the tires on the ground… there’s always an exception. MotorWeek’s Garick Zikan takes us on a journey that literally took flight…

For more than 5-decades driving enthusiasts have been thrilled by the throttle of the Porsche 911. Their enduring formula for speed and handling has naturally evolved over the years… while maintaining the driving dynamics that truly are uniquely Porsche. All that adrenaline inducing engineering began 55-years ago in that building right there. So we came here to Stuttgart to drive this iconic car on two continents. Let’s go… 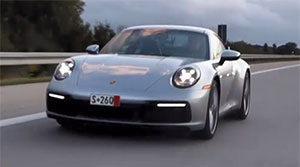 And with that we were off and running… detouring through the German country side. The razor-sharp steering slices through the curves… while the active suspension effortlessly smooths out the unpredictable surfaces that make driving on these backroads so engaging.

“By now we’ve spent quite a bit of time in this all-new Porsche 911… we went to the international press launch… and we recently put it through its paces in a full road test. So we know it’s powerful, poised, and precise… and so do you. So at this point… the only thing left to do is settle into the driver’s seat and go for a drive… and that’s exactly what we’re doing right now in Germany.”

Then it was on to the fast lanes of the autobahn. With an 8-speed PDK harmonizing the hoofbeats of the 443-horses charging out of the twin-turbo 3.0-liter flat-six… the speedometer sprinted to triple digits on unlimited speed sections… where traffic allowed.  And then we arrived in Leipzig. 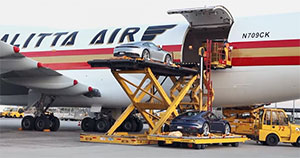 “So here’s where the transatlantic portion of our trip begins. They’re loading those cars… onto that cargo plane here in Leipzig... and here’s the really cool part… we get to fly with those cars in that plane. We’ll head out over the Atlantic Ocean… and touch down in Cincinatti, Ohio.”

There’s a process of safety checks… placing the cars onto pallets… and tying them down. Loading this re-purposed 747 is a carefully calculated exercise. With the cars securely in place… we settled in for more than 8-hours in the air.

In Cincinatti, the cars were unloaded…and the treads hit the road once again on American soil. Enticed by the scenic route… the German engineering felt just as at home zipping past kudzu covered hills in Kentucky… and sweeping through the bends weaving through Appalachia.

Crossing into Tennessee we set our sights on the Tail of the Dragon. This 11- mile stretch of asphalt with 318- twists and turns… dips and climbs through the mountains into Western North Carolina. 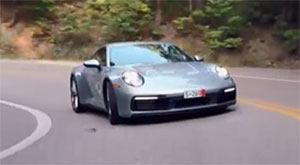 “We’ve driven many different generations of the 911… and we always comment on how flat and in control it is going through the curves. Usually we’re on a track when we’re talking about that. But all that engineering that makes the 911 perform so well on the track… is at work here as we’re going through the curves along the Tail of the Dragon. So naturally out here on the road it’s balanced and agile… and I think even more engaging.”

From start to finish… our journey was more than 5-thousand miles… most of them in the air… but the best ones were on the ground… as this generation of the Porsche 911 adds a new dimension of sporty European flare… to the very American tradition of going on a road trip.