More and more car companies are getting involved with motorsports these days. For some, it’s a push for name recognition, or to establish credibility in the performance car arena. But as our recent drive in a trio of track machines shows, for some companies, racing is just in their DNA from the start!

No company has been more closely tied to sports car racing success than Porsche, having won hundreds of titles at the most challenging venues of endurance racing like Lemans, Sebring, Daytona and the Nurburgring. 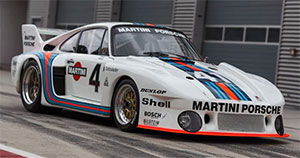 These sports racers look just like the models you can buy and drive on the street, and that’s no accident...

For Porsche, racing is the ultimate proving ground.

Hurley Haywood: “A lot of manufacturers, you know, say race on Sunday, sell on Monday. But in Porsche’s case, they really use the race track as a testing bed, so if it works on a race car, it’s probably going to work on a production car. And that’s been the case for as long as I’ve been racing Porsches…”

Patrick Long: You put these cars under tremendous stress, you learn lots about the powertrain, about chassis rigidity. I think the technology transfers two ways, a lot of times in racing, we learn something that can be applied to the next generation of the street cars, but a lot of times, the street engineers develop something that will come toward the motorsport angle.

Arguably Porsche’s most successful race car was the 935. It racked up more than 150 victories worldwide in the 1970’s and 80’s, many with Hurley Haywood at the wheel, and its outrageous aero bodywork captures the imagination of race fans to this day.

To celebrate 70 years of Porsche cars, the company created a modern 935 Club sport racer, based on the 700 horsepower 911 GT2 RS street car and limited to just 77 units worldwide.

And then…..they invited us to drive it.

To say this was a once-in-a-lifetime experience would be an understatement.

Dave Scrivener: “Driving the street version of the GT2 RS is mind-blowing enough, driving the race car. The GT2 RS Clubsport, is just phenomenal. But it really tells how Porsche uses their racing technology to make the street cars that much better, all the time.” 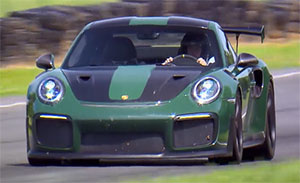 Hurley Haywood: Porsche customers want to have that ability to say.. I’ve got the same car, almost, that they race on the race track. And even though some of these cars have speeds close to 200 miles per hour, you’re never going to do that on the street, but people like to know that their cars are capable of doing that.

Patrick Long: “They can see these cars wrapped, and racing with numbers and a slick, sexy profile, and then they can associate a car that they can buy off the showroom floor, and go to work in the morning and feel something about what they saw in the emotional sport that is motorsport.”

As part of the same track test at Germany’s Lausitzring, Porsche trotted out two slightly more attainable Clubsport models for us to try:  the 911 GT2 RS Clubsport and the 718 Cayman GT4 Clubsport.

We pushed all three machines to our limits and came up well short of tapping their full potential, but came away awestruck by the precise performance and raw-yet-refined nature of these purpose-built racers.

Patrick Long: “With Porsche, they’ve always raced, it’s part of the DNA of the company, and that part of it is special for me as a driver because you look back at our roots, and the heritage of running at Daytona, Lemans, Sebring…that part of it tells a connection. It gives you something that you belong to, of this heritage and this story that’s still being told.”