The American Recovery and Reinvestment Act of 2009 garnered worldwide attention and debate, as much for its size: $787 Billion as for its wide-sweeping scope. The national impact was felt immediately through tax credits and by creating or saving millions of jobs, but a portion of that stimulus funding was invested in long-term automotive and alternative fuel projects that, without a lot of fanfare, are now showing impressive results.

You might see them every day and not take notice: A hybrid school bus or delivery truck going about their daily routines, an electric car re-charging outside the local grocery store, or a commercial lawn mower running on propane fuel.

Alternative fuel and electric-drive vehicles are becoming more commonplace in every facet of our lives, but the charging stations and fuel depots that support these vehicles, the technicians who repair them or the first responders who might encounter them at the scene of an accident all likely owe a portion of their existence or expertise to ARRA funding.

Developing the infrastructure for alternative fuels has up to now been a chicken-and-egg proposition: Both vehicle makers and fuel providers have been understandably reluctant to commit resources in the absence of customer demand. Through 25 Recovery Act grants, the Department of Energy’s Clean Cities Program has been able to encourage both to grow in tandem. We visited a few projects to see the result for ourselves. 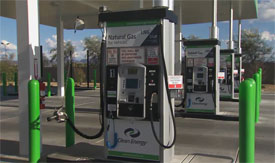 Parcel carrier UPS has purchased 48 Liquid Natural Gas-powered big rigs, and with that guaranteed customer base, it made fiscal sense for Clean Energy to expand its LNG fueling network across the west. This new station is a vital link in UPS operations between California, Arizona, Nevada and Utah. With it, these rigs can do a complete trip between Las Vegas and Ontario, California on one fill-up.

TOM BRESSLER: LNG is the cleanest fuel available for diesel trucks; it’s cleaner, it’s cheaper, it’s domestic. We’re charging $2.79 a gallon when diesel in the area is running $4.50 or 55 at this moment.

JOHN DAVIS: Stimulating partnerships between fleets and alternative fuel providers is rewarding all of us with reduced dependence on oil, reduced vehicle emissions, and more cost-effective transportation. For the residents of Boise, Idaho, it has also meant a little extra sleep on trash pickup day. Republic Services used an ARRA grant to install a time-fill, overnight CNG refueling system at its parking facility and to help them buy a new fleet of CNG-powered refuse haulers. Not only do they save money with lower fuel and maintenance costs, but the new rigs are 7 times quieter than the old diesels, meaning fewer noise complaints from the citizens they serve.

RACHELE KLEIN: What started here and was successful here in the Boise market has carried with our company from coast to coast and we now have 14 new stations under construction and fleets coming online. We’ve ordered 500 natural gas trucks just this year alone. 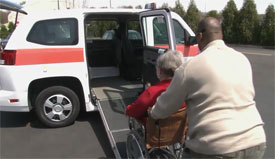 JOHN DAVIS: And in Connecticut, ARRA funding has prompted two taxi companies to join forces and make a clean switch to natural gas, and in the process granted new freedom of movement to thousands of wheelchair-bound residents. Metro Taxi of West Haven and Yellow Cab of Bloomfield are the first companies in the country to take delivery of the MV-1, a purpose-built wheelchair accessible taxi made in South Bend, Indiana’s former Hummer factory by VPG Automotive.  The two companies split an order of 140 MV-1’s and 70 Ford Transit Connects, all running CNG, and both have installed public-access CNG fueling stations.

These are just a few examples of public and private interests working together, and it’s not just about CNG; similar projects are underway in more than 36 states, helping to deploy more than 8500 advanced technology vehicles and also build nearly 1600 fueling stations for electric charging, propane, natural gas, E85 ethanol and biodiesel. In fact, 300 million dollars of DOE Clean Cities recovery act awards have stimulated private investment in nearly a billion dollars worth of alternative fuel vehicle and infrastructure projects. There is no magic bullet for cleaning up our automotive act or reducing our dependence on petroleum.  What works in Wisconsin may not play in Peoria, but by investing in local initiatives as well as national programs, the American Recovery and Reinvestment Act has succeeded in laying the groundwork for a clean driving future that all Americans can benefit from.