For most, winter is the time to put away the two-wheelin’ toys, and grab a little more shelter for the daily grind. Well, we recently caught up with a group of Rokon riders who, when the snow piles up, they defy conventions and hit the trails for some muddy fun!

Mark Spreadborough: We’re in Sanford Maine at my friend Chip’s house.  It’s a beautiful place where he’s got a horse farm and a lot of property with creeks and drainages and woods to ride through.

Chip Austin: Our farm here is a 128 acres. It’s typical Maine woodlands - rolling hills - some elevation change. And we have rocks. Maine is really good at growing rocks. The deal breaker, though, is the snow.

Bob Gallagher: This is Chip’s place. Uh, he’s the host, uh, we’re in his machine shop - an active machine shop that he uses for business. He’s been having these rides up here for, uh, 43 years I think.

David Fillman: I don’t use brakes normally because I don’t get going fast enough (guys laughing) 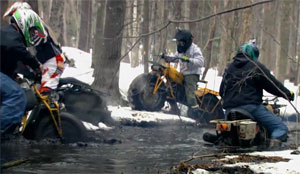 Chip: It’s been a long winter and I think everybody has an extra dose of cabin fever so it’s like, just give us a good day. We want to get out and go do something.

Chip: When I saw the weather report, I was like, Oh boy - here we go. We’ve done all this work and nobody’s gonna show up. It’s a roll of the dice whenever you do something like this. You don’t know what you’re gonna get. On a normal ride we - lucky if we have 15 bikes.

Chip: Good. How are you? Thanks for coming over.

Chip: Oh, that’s the guys from New Jersey. Hooo. How you guys doin?

Mark: Chip’s ride attracted, uh, actually more riders than we had at the Behind the Barn ride.

Chip: Hey Spike. How you doing?

Mark: There was a lot of the local guys that I never knew or communicated with and they all brought plenty of bikes for guys that flew in and everyone had a bike to ride.

Chip: Wow!  That is beautiful. That is very nice.

Chip: Pretty impressed with the turnout. All of the bikes that were here, forty odd bikes, no two of ‘em were the same. It was more than I expected, honestly. I thought it was huge really.

Chip: Saturday will be interesting. I think it will be bigger than ever. The guys from Rhode Island is bringing 6 or 7 bikes, he says. If you have 6 or 7 bikes, there’s a pretty good chance you can ride one. (guys laughing).

Dave: So where we gonna ride? 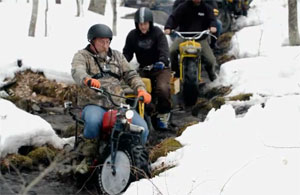 Chip: We have a bunch of trails as an established trail loop. We’re gonna work a stream crossing into the loop. Ride down the stream for a short ways.

Chip: When the conditions present itself, the snow riding is the best ride. It’s loose on top, slushy on the bottom. We call it corn snow. There’s no, there’s no forward bite at all. It’s like riding on BB’s. We ride more Rokons in the winter time here than we do in the summer time. It’s not a fair weather sport. You know, everybody rides these things in all kinds of conditions. That’s what the bikes are for.

Mark: A bunch of our riding has been to this creek that is behind me right now. As Chip would say, ‘it’s wicked boney’. I learned that - that’s the lingo. It means it has a lot of rocks. There’s a lot of them and they’re very hard.

Chip: Bob shows up. Of course, these guys all arrived on planes so they’re depending on bikes to ride. So Bob grabs my two-stroke bike.

Bob: Chip said ride it like it’s my own. I don’t know, he’s seen how I treat my own stuff, so he knew what was going to happen. I start out slow and try to be kind to his bike. But after while it just gets a little more rough. We got to a creek crossing and it’s kinda steep on the far side and I was trying not to get my feet wet. And, uh, started through the creek and everything was going alright and got to the far side. And the front wheel came up and kept coming up and up and I knew I wasn’t going to hold on to it. Ah, I just tossed it to the side. “Sorry Chip!”

Chip: Ride over him Kevin.

Mark: (laughing) ride over him.

Chip: Oh, I expected that. That was, yeah. I actually thought it was kinda mild. I thin.. I thought he kinda ‘sallied out’ because it came back in one piece. (guys laughing) 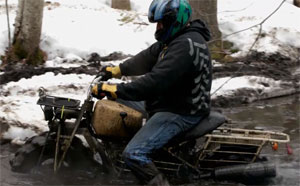 Mark: We didn’t have a lot of big tall hills to climb here. But we did have a lot of fun in the, in the creek. Black labs and Rokons and riders are all attracted to creeks.

Kevin ‘Stoney’ Stone: Yes we do come across brooks where we do have to get across and that. And sometimes we do find deep spots. I do have a snorkel setup so lot of times, I’m usually the first one that they send across to find out how deep it is. You just know if you get in the water like that, don’t look to your left. Keep you head turned the other way cause if you look to the left, you’re gonna have dirty eyes.

Kevin: I have tried some pretty dumb stuff out there and people shouldn’t do some of the stuff that I do with them.

Mark: You know, Rokon romps and Rokon riding and Rokon riders are kinda unique in that there is a lemming effect that if one person tries something and fails, there’s something that triggers in a rider’s mind and they decide that they could probably do it better. Cause the first guy was obviously stupid. So they’re gonna go in there. And, uh, usually that will attract like 5 or 6 of them in the same predicament and that’s always entertaining for the 8 or 10 or the other ones that observed that. 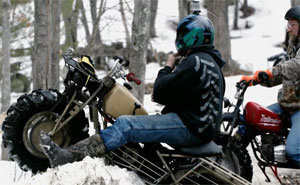 Chip: It was funny. Yeah, I enjoyed it thoroughly. And knowing that I was warm and dry and they were flailing around down there.  I’ve done that enough that if I miss a day of punishment, I’m OK with that.

Mark: The cool thing about the bikes is, is it attracts a certain type of character.

Brad Richelson: When we started having the romps, I started to make a lot of friends. Like anything, you know, without friends and family you really don’t have a lot. You’re by yourself. (people yelling around fire) There’s a bunch of other crazy people like me out there who like to show up at these romps and watch each other fall over and laugh and drink beer and eat and then go riding again. It’s a great time. I can’t even say its really a hobby because it’s really part of my life. I can’t imagine a day without having a Rokon around. I really can’t. (in background - ‘we need another tree’).