FRED SIMEONE: My definition of a successful museum experience is when you leave that exit door with more up here and here than you came in with. So, it’s about education. It’s about learning, and hopefully –and this is every collector’s dream, conveying the passion that you have on to someone else. Everyone knows museums are meant to educate, which is what we do, and most museums interpret, which is one of the three principal rules of a museum. But one of the first, is preserve… not enough American car museums, or museums anywhere, are interested in preservation. We believe that there is a lesson in preservation which we can tell simultaneously while describing these great racing sports cars.

LAUREN MORRISON: The 1964 Shelby Cobra Daytona Coupe became a sports car racing icon in a short but illustrious career, capped off by winning the 1965 GT World Sports Car Championship, breaking a decade-long streak of dominance by Ferrari and bringing that title to America for the first time. The first of the six daytona coupes, and the only one made entirely in America, now resides at the Simeone Foundation Auto Museum in Philadelphia, where it highlights a collection honoring the spirit of competition. Peter Brock’s beautiful and aerodynamic bodywork was created in just two months, but in testing delivered a top speed 20 miles per hour faster than the Cobra Roadster.

This particular car went on to solidify the Daytona’s legacy, at the Bonneville Salt Flats in 1965, where an impromptu test session netted 23 international speed endurance records. 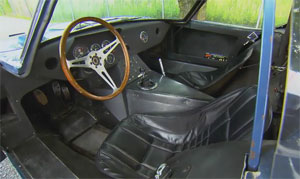 Land speed record holder Craig Breedlove lapped the salt for 12 hours at top speed, averaging 150 miles per hour, including pit stops! He recalls the excitement and the casual nature of that record-setting performance.

CRAIG BREEDLOVE: Shelby sent the car up with a mechanic and we unloaded it and got some 55-gallon barrels out there, hand pumps, and uh, we went on the ten-mile circle, which is dead flat on the salt. It’s pretty slippery, and it breaks through fairly soon into the mud, so you’ve got a fairly good section where it’s really a lot of fun to drive it. We were running, I don’t know, 160 or 70, you know, for the speed run, and then we’d slow way down from fueling it by hand in between the stops! You just put the car in a drift, and keep steering into the slide and recover it, and feather it where necessary, and so on and so forth.. if it starts to come around a little too much on you, you need to back off a little on the throttle, and then squeeze it back down again..

LAUREN MORRISON: After that Bonneville run, the Daytona was briefly owned by musician Phil Spector, who actually drove it on the streets of L.A.!! It then disappeared from public view, shrouded in mystery and hidden away for 30 years before being aquired by Fred Simeone for the museum.

LAUREN MORRISON: But as you can see, this car is no relic of days gone by. All of the cars at the  Simeone museum are kept in original running condition, and are driven routinely for public demonstrations.