The new C8 mid-engine Chevrolet Corvette made  a huge impression in the automotive world when it arrived last year. So much so we even named it MotorWeek’s Drivers' Choice Best of the Year. But, of course, it was not the first Stingray. That car made an even bigger splash when it rolled out of Detroit in 1963. And our own Roger Mecca has had a chance to experience this legendary American muscle and find out why for nearly six decades it's still the biggest fish in the pond.

Roger Mecca: In the automotive world, few cars are as synonymous with the country they hail from as the Chevrolet Corvette. Since the first “plastic fantastic” arrived for 1953, it’s been the epitome of the American sports car, and numero uno poster child for our car-crazy culture. But, even with that, it took 10 years before Chevy got serious about the Corvette... 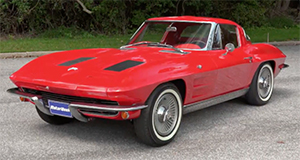 In 1963, GM unleashed the second incarnation of the Corvette, the C2. The first one to have the Stingray name. It carried over many of the same beautiful design traits from the original Mako concept car designed by Larry Shinoda and Bill Mitchell. And today, in my opinion, this is still one of the best looking things on four wheels.

Greg Connelly: This car was like, if I used the term from the 50’s and early 60’s, it was like a spaceship.

Roger Mecca: Greg Connelly is the owner of this stunning 1963 Stingray Coupe, the first non-convertible Corvette available for buyers. Though he’s owned many different models over the years, he’s loved the C2 hardtop ever since first laying his eyes on one.

Greg Connelly: When you sat in that car and looked at that instrument panel, and then even from the exterior if you stood at the back of the car and you looked down at that car, again, it looked like something from outer space.

And the car performed that way also, so that was the best part of it.

Roger Mecca: It should come as no surprise then, that both Buzz Aldrin and Neil Armstrong owned a C2. And part of that far out look is due to the split rear window in the tapered rear deck, a feature only found on the ‘63. 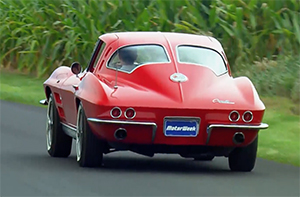 Lead Corvette designer Bill Mitchell was a fan of biomimicry, and with the Stingray, he was able to bring his vision of a road-going aquatic sea creature to life. He insisted that the car’s central wind split run the full length of the car, much like the spine of a fish, and the only answer was the split window. GM brass hated the idea, but in the end, Mitchell got his way.

But there were issues, chief of which is that the rear visibility. Because of that center strip, you can’t really see out of the back in any meaningful way. And then in terms of production, double the windows meant double the assembly time.

And when you’re talking about making tens of thousands of cars a year, it quickly became a deal breaker, so GM killed the feature for 1964 and beyond.

But many things did stick around, including pop-up headlights, independent rear suspension, electronic ignition, and that shapely long hood and pointed front end that evoked speed, even when standing still.

But aside from the rear window, another design element that GM leadership should not have killed were the functioning hood vents that were part of the original concept. 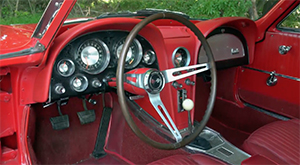 The engineers wanted real vents under the hood to relieve pressure as the car would speed up but the bean counters at GM decided that it was too much of a hassle so they put fake ones in there instead. It turns out that the engineers were right, because as you approach 100 miles an hour, the car starts to lift. Which can be terrifying.

But you wouldn’t really want to go anywhere near 100 anyway. This is a 57-year-old car with drum brakes and narrow tires, so tearing around at breakneck speeds could end badly. That said, it’s an easy car to have fun with.

The C2 has near fifty-fifty weight distribution, and combined with tight steering and a race inspired chassis you will have plenty of fun on twisty stretches of asphalt.

All 63’s featured a 327 cubic inch V8 with anywhere from 250 standard horses up to 360 horsepower with fuel injection- a rare feature at the time. But not always a popular one.

Rumor has it that so few mechanics actually knew how to work on fuel injector systems, they would tell Corvette owners to take them out and put in a carburetor, which a lot of owners actually did. And in the process, took away one of the things that made this car so special. 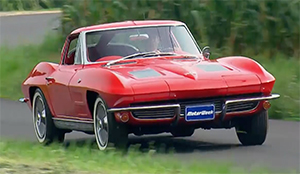 GM kept the new C2 design for only five years, until the C3, fashioned after the Mako Shark II concept car, debuted in 1968. But no other year would ever be as desirable as the ‘63. And if you’re looking for one to park in your garage, get ready to shell out at least a hundred thousand for a base coupe, and far more if you want one with the optional packages, like the race ready Z06 fewer than 200 of those were ever made.

But honestly? You don’t need anything fancy to enjoy the incredible driving spirit and history this car offers.

There’s one sure-fire way to be able to tell just how iconic a car really is and that is by the impression it leaves on people as you drive by. Throughout the day today, I have had people smile, wave, top and take pictures. And that tells me that even after almost 60 years, this car is just as impressive as it was in 1963.