The Mustang-Camaro grudge match began on September 29, 1966, the day the Camaro went on sale as Chevrolet’s answer to Ford’s two-year old pony car sensation. And from the start, Camaro’s performance standout was the “virtually race ready” Z/28 package.  Well, our Roger Mecca is always looking for classic standouts, and when he had a chance to drive a first gen Z/28, he quickly buckled up for a joy ride.

ROGER MECCA: When most people think of classic American pony cars, the first one that comes to mind for car fans is the Mustang, just like this Shelby GT350. But not me.

ROGER MECCA: “I like the Mustang too, but for me, the quintessential classic muscle car is the Camaro Z/28. The one that put Ford on their heels for decades to come.”

By 1967, roughly one million Mustangs were already on the road. To compete, against Ford’s sporty coupe, the “bowtie brigade” turned to the Chevy II (two) Nova Super Sport, but it lacked the styling pizazz of the Mustang.

So G-M engineers came up with something entirely new, with one goal in mind: to beat the Mustang in every possible way. In fact when asked by the auto press what the name Camaro meant they replied, it’s a small ferocious animal that eats Mustangs.

ROGER MECCA: “Chevy had lots of different variants over the first few years, but this is the one everyone lusts after. The 1969 Z/28.

CHIP MILLER: “This particular car is my absolute favorite GM car of all time” 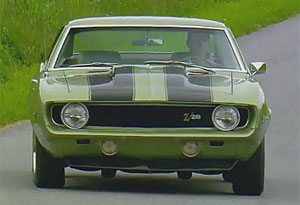 ROGER MECCA: Chip Miller is the owner of Euro Star Auto Gallery outside of Baltimore, specializing in rare and exotic automobiles.

CHIP MILLER: “I think this car will stand the test of time. Because it has been so heralded over the years as being a versatile racer, a versatile street car, with the look at feel of American muscle, it’s just got it all going on.”

ROGER MECCA: The Z/28’s main rival was the Mustang Boss 302. But in terms of sales, there was no competition. The ‘69 Z/28 outsold the Boss by a 12 to one margin. Even in terms of total Camaro numbers, Chevy had closed the gap on Ford, selling only 50 thousand fewer units in 1969. In just three short years, the Camaro had officially become a serious adversary for the mighty Mustang.

ROGER MECCA: "I love a good underdog story and in a lot of ways that’s exactly what the Camaro was. The Mustang was an American icon everyone was chasing after and this was just an upstart. But in a lot of ways, it was also a better car.”

The $458 Z/28 package gave owners quicker steering, better suspension and for the first time ever, the option of four-wheel disc brakes. And though precise steering and classic Detroit muscle don’t always go hand in hand, the Z/28 gave me plenty of confidence to punch the accelerator no matter how twisty the roads got.  And by design, the Z/28 was built to put down fast laps on a track with a focus on handling. But for some consumers, that was actually a bad thing.

ROGER MECCA: “Gearheads might have wanted a straight line speedster, but that’s not what the Z/28 was. It got to 60 miles an hour in about 8 seconds and it was built for the race track, not drag racing.”

And on the race track it was dominate winning the Trans AM racing series title in both 1968 and 1969. But racing conditions demanded that the 302 V-8 be tuned to deliver top-end power, where the driver would spend most of the time. That also means less speed off the line. But that all changes once the RPMS start to climb.

ROGER MECCA: “Get up around 3 or 4 thousand RPM and this thing turns into a rocket ship. And the way this engine sounds… 30 might as well feel like 100.”

So what’s not to love? Well, there’s no A-C and driving on a hot summer’s day will go from uncomfortable to miserable in a hurry.

The lack of power steering and a heavy clutch means road trips or heavy traffic of any kind will become a labor intensive endeavor.

And while you will definitely fall in love with the engine’s mighty roar, your neighbors definitely won’t.

But trust me when I say this: it’s all worth it.

ROGER MECCA: “I’ve had the privilege to drive a lot of incredible cars over the years, but very few are ones I’ve actually wanted to take home. But this one is.”