From the Ford GT40 and Porsche 911, to the legendary Ferrari 250 GTO, race tracks have helped produce some of the most coveted performance cars of all time. Our own Roger Mecca explores one model, in particular, that turned the racing world on its spoilers with speeds and looks that and still impresses nearly 50 years later.

ROGER MECCA: There’s an old saying in motor-racing that says ‘win on Sunday, sell on Monday’, meaning that when a car dominates on the track, it usually does the same in the showroom. And in terms of dominating the competition, few cars did it so completely, and so quickly, than the Plymouth Superbird in 1970 with NASCAR legend Richard Petty behind the wheel.

"But unlike other NASCAR models like the Ford Gran Torino, the Superbird was not a hit with the public in fact a lot of them sat on car lots collecting dust. But 50 years later, it’s considered one of the most iconic muscle cars of all time.” 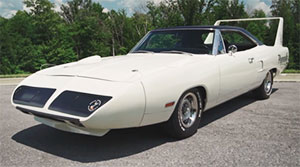 Larry Cate is the proud owner of this 1970 Plymouth Superbird, which was once owned by The King, Richard Petty himself. In Larry’s opinion, the car’s iconic status is something that’s been building over the years. And it’s polarizing looks are a big reason why.

LARRY CATE: “You look at it and you think who would build this, what were you thinking? Particularly, my wife says,

Particularly, my wife says, Who would drive that to the store? It’s just so un-functional.” 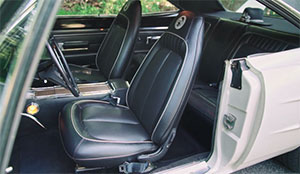 ROGER MECCA: Like so many legendary cars, the Superbird’s story starts on the racetrack. In 1968, Ford was dominating Chrysler’s NASCAR teams, who desperately wanted to get to the winner’s circle. Dodge General Manager Bob McCurry demanded that his designers do whatever it would take to beat Ford.

Luckily, Chrysler was also in the rocket building business at the time, working with the US government on a project called Operation Paperclip. Meaning, Chrysler had actual rocket scientists on the payroll. Who better to design a race car? The result was the Dodge Daytona.

"After the Daytona took NASCAR by storm in 1969, Dodge’s sister division, Plymouth, introduced the Superbird for 1970. It was basically a Plymouth Roadrunner, with a nearly 20-inch cone on the front to cut the air, and a massive wing in the back to provide downforce and stability. And along the way the welcomed an old friend came back into the fold.”

Once the Charger was unveiled, Richard Petty asked Plymouth to build a similar design for him, but they declined.

Fed up, Petty left and joined Ford’s NASCAR team instead, signing on for one season. Plymouth panicked and it wasn’t long before they were ready to deliver what The King wanted.

LARRY CATE: “The story that Richard said, is that one day he was in Level Cross and he said, somebody from Plymouth’s coming, and it was the president of Plymouth or president of R and D Plymouth...and they said Richard, we got your wing car, we’re gonna call it the Superbird, here’s what it’s gonna look like. And he said, alright boys, I’ll be back next year.”

ROGER MECCA: Petty went on to win 18 races in the Superbird. But despite the success, very few people actually wanted one. In fact, it’s rumored that dealers actually had the noses and tails removed to turn the cars back into regular Road Runners, just so they would sell. 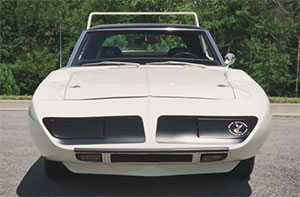 Under the hood is a 440 cubic-inch V-8 producing 375 horsepower. And the HEMI version topped out at 425 horsepower. With the Superbird’s sleek nose and huge wing, Petty was one of the few drivers able to break NASCAR’s elusive 200-mile-per-hour barrier.

Which quite frankly, seems insane. Even today, with modern technology, a car hitting 200 miles per hour is an impressive feat. The fact that Richard Petty was able to do it consistently, and confidently 50 years ago, proves just how revolutionary this design really was.

But, the good times didn’t last. In 1971, NASCAR changed the rules, stating that any car with an aerodynamic shape like the Superbird had to have it’s engine displacement capped at just 305 cubic inches. The reason? They were too fast. 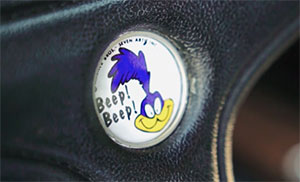 And as quickly as it flew onto the scene, the Superbird was gone.

But it’s certainly not forgotten. Even without Richard Petty’s signature, an example like this can easily go for a quarter-million dollars- or more. Which proves while it may have started out as an ugly duckling, the Superbird definitely turned into a swan… with a V-8.