For nearly 30 years, the Lotus Esprit was a staple of the mid-engine sports car world. It was at the start, and remains, a bargain compared to classic exotics from Ferrari and Lamborghini. With this in mind, our Roger Mecca wanted to discover for himself if the very British Esprit really is worthy of the same attention as its classmates from Italy. 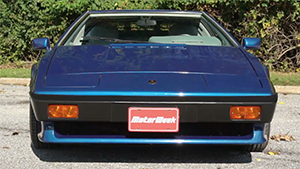 And for good reason. Despite having less power and fewer cylinders as many of its contemporaries, for as long as the Esprit was in production, it was regarded as one of the best handling, and most exciting supercars ever made.

ROGER MECCA: For 22 years, Jeff Wong has been the owner of this 1987 Lotus Esprit Turbo HCI. Known as the Series 3, this iteration was the last to retain the timeless styling by the legendary Italian car designer Guietto Giugiaro. So while the Esprit was created to go head-to-head with the Italians, it certainly looked like something that had rolled out of a factory in Maranello.  But the next year, British designer Peter Stevens, who would later design the legendary Maclaren F-1, redid the Esprit’s exterior, softening Giugiaro’s classic wedge styling. So for many Lotus fans, Jeff included, the S-3 marks the high point of the Esprit’s illustrious life.

JEFF WONG: To me, especially the series 3 Esprits, are the pinnacle of the design for the sort of pure sports car. There’s no power brakes, no power steering, and I feel totally in touch with the road more than any other car I’ve ever driven.

ROGER MECCA: Back in the late 80’s Ferraris, Lamborghinis and Porsches were getting all of the attention. But in many ways, the Esprit was actually the better car. It’s just as fast as a Ferrari 328, it had better handling than a 911, and was way more affordable and practical than a Countach. So it was the best of everything, all in a beautiful package.

You’ll hit 60 in about five-and-half seconds, it will take you 14 seconds to hit the quarter mile, and on a long enough road, you could reach 150. But this is a car where the numbers don’t tell the whole story.

Despite this car only having 215 horsepower from it’s 2.2-liter engine, it is surprisingly fast. And the acceleration is just so smooth.I know its a turbo but there’s almost no lag at all. But the real ace in the hole for the Esprit all comes down to weight.

Lotus engineers had a mantra: performance through light weight. Which is a simple idea: the less a car weighs, the more nimble and responsive it will be- while still being fast. It’s the biggest reason the S-3 still carries the reputation as being one of the best handling sports cars to ever grace a curvy road.  But some of that poise was lost when the Peter Stevens-design added more than 300 pounds to meet U-S safety standards. It was still impressive, as MotorWeek discovered in 1988, but many fans say it just wasn’t quite the same. And thanks to its comfortable, understated leather interior and how easy it is to drive, there’s no reason to. Unlike many of its rivals, you can drive the S-3 for hours as its smooth ride easily eats up mile after mile. The clutch is heavy, but not punishing and though it doesn’t like to be rushed, the transmission’s short throws are easy to navigate. There’s no power steering, a feature offered on the subsequent model, but it quickly lightens up once you start driving and even at a stand-still, it is far lighter than many of its Italian peers.

And while it’s Italian cousins may have been fighting for the spotlight, the Esprit was happy to be on a quiet stretch of winding road, putting smiles on the faces of everyone lucky enough to get behind the wheel.