The history of the automobile is full of beautiful examples of engineering and design. But for all of the Jaguars, Aston Martins, and Ferraris that have graced our roadways over the years, there are dozens of lesser known, but equally beautiful examples that are often overlooked by even the most swooning car lovers. Our own Roger Mecca has discovered one such car and set out to learn more about this Italian sleeping beauty. 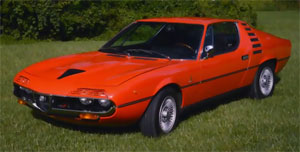 ROGER MECCA: This is a 1972 Alfa Romeo Montreal. Ever heard of it? Don’t be too hard on yourself if the answer’s no. Most casual car fans have never seen this Italian beauty.

ROGER MECCA: “I first saw the Montreal a few years ago at a car museum and when I did, it stopped me dead in my tracks. I thought, how can a car that’s been around since 1967 and look this beautiful, fly under the radar for such a long time. But as it turns out if you look a little bit, you’ll find plenty of other people out there who love it just as much as I do.”

JACK RUGH: “It’s a little bit of Alfa’s version of a muscle car and I grew up around muscle cars and this has a certain resonance with that that I just enjoyed. I was visiting my brother on the west coast and we went to the Alfa convention in Portland Oregon and on the display field, there were about six Montreals lined up and that’s the first time I’d really seen them and they just made quite an impression.”

ROGER MECCA: Already a dedicated Alfa Romeo fan, Jack Rugh purchased his Montreal in 2000 and it remains one of less than 100 here in the U-S. Because each one was handmade, fewer than 4000 were ever built in its seven-year production run and despite the name, none were ever formally sold anywhere in North America because of emissions standards. So how did an Italian sports car, never even sold in Canada, become known as the Montreal?

JACK RUGH: Well, it was the Montreal world’s fair in Montreal Canada in 1967. The world’s fair commissioned Alfa Romeo to design a car that represented the future of the automobile.

But the cars were a big hit at the world’s fair and Alfa decided to put them into production.

ROGER MECCA:  It’s no surprise it was such a big hit when you consider who designed it: Marcello Gandini. The same Italian genius who gave us the Lamborghini Countach and Muira, the Lancia Stratos, Ferrari 308 and two editions of the Maserati Quottroportte to name just a few. Though just 28 at the time of the Montreal’s commission, it only took him nine months to create it from scratch. Today, it takes at least two years for an automaker to even produce a prototype. 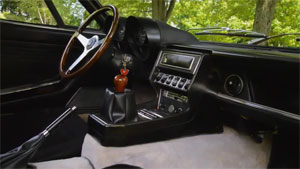 ROGER MECCA: "But as beautiful as this car is, and it is gorgeous, sports cars are meant to be driven. And in that regard, the Montreal does not disappoint.”

I know, I know, not exactly jaw dropping and compared to a modern sports car, it’s anything but a road-ripping racer. But when stacked up against the classics of the 70’s, the Montreal is as fun to drive as it is stunning to look at.

ROGER MECCA: “It’s got a huge torque band and I’ve got power anytime I want, all the way up to the 6500 RPM where it redlines. And the handling! I can not tell you how great this car handles, I am so blown away at how nice it is.” 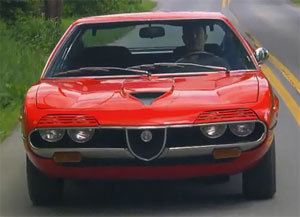 And regardless of the Montreal’s birthdate, the sound coming from that Italian-bred V-8 is just as magnificent as anything on the road today.  It all adds up to an experience that goes so far beyond the usual “must have” requirements that a sports car needs to be called great.

Which brings me to an important point.

ROGER MECCA: “We get so caught up in things like horsepower, zero to 60 times, or how fast a car goes around some old German race track. But what we really want is style. And persona. And the presence to make someone who doesn’t even like cars to take one look and just go… wow.”

ROGER MECCA: And with a new super car coming out seemingly every month, impressing car aficionados gets harder and harder. So instead of looking to the future for the next big thing that’ll knock us off our feet, what we really need to do is take a glimpse into the past, because you never know what kind of classic treasure you might find!