In 1966, Lamborghini proved there was no better place for a sports car to have the engine, than over the driver’s shoulder. many mid-engine designs like the Countach, Testarossa, Esprit, and GT-40. Have become popular icons. But others just as spectacular have slipped through the cracks of history into relative obscurity. That’s where our own Roger Mecca comes in, with a mid-engine classic that deserves and respectfully demands our attention.

ROGER MECCA: In the 1960s and 70s, the Italians ruled the mid-engine supercar universe.

But in 1978, an unlikely name threw their hat into the ring, with a car that has since become as exotic and legendary as anything with a horse or bull on the hood.

"The company was BMW and the car was the M1, the first and only mid-engine supercar BMW would make until the I-8, more than 30 years later. But when you consider everything that went wrong trying to create the M1, it’s a miracle it was ever made.”

In the 1970’s, the BMW CSL dominated touring car racing. But after Porsche debuted the 935, BMW saw fewer podiums and decided a new weapon was needed for the racetrack. They conceived a mid-engine bullet that would be both fast and agile enough to blitz the Porsche. But BMW was not in a position to build such a beast. Luckily, they knew who could.

“BMW turned to the kings of mid-engine sports cars, the Italians, and agreed to have Lamborghini build the cars. BMW would provide the engine, a 3.5 liter straight six that would later go on to power the first M5. And to design this beautiful body, BMW enlisted the man many consider to be, the greatest car designer in history.”

That man was Jor-Jet-Oh Jew Jar-Oh, a name attached to some of the most lauded brands in automating, including Ferrari, Alfa Romeo, and Maserati.

Afraid people would mistake it for an Italian import, its rumored BMW put two badges on the back to eliminate any speculation of who made the car, as it went screaming by drivers on the road, or the track. 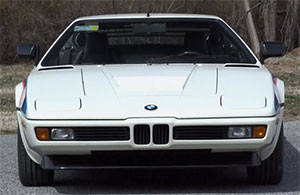 “With an epic designer in place, an agreement with the masterminds at Lamborghini, and Porsche firmly in the crosshairs, The M1 was poised for success. But then reality set in, and to say the project became a disaster would be… an understatement.”

In order to qualify for racing, BMW had to produce 400 cars for public sale in 24 months. Lamborghini promised to deliver at least two a week, even building seven prototypes. But then Lamborghini hit a rough financial patch, creating massive delays. BMW panicked.

As the story goes, several boardroom squabbles resulted in BMW literally breaking into the Lamborghini factory in the middle of the night to take back the prototype M1s, fearing they would go into receivership and be sold for scrap.

"So with the clock ticking, BMW had to scramble and find vendors who could build the parts and the body, and another vendor who could put them all together. But by that point it was too late. The racing rules had changed and the M1 no longer qualified. So suddenly BMW was left with a race car, and no race.” 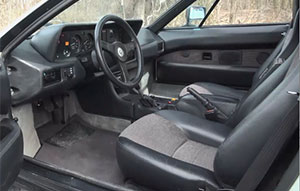 After so much expense and effort, BMW was determined to get them on the track. So they came up with the perfect solution: invent their own race- the BMW ProCar Championship.

"It lasted for only one season in 1979, as a support series for Formula 1, with many drivers actually doing both races.

In fact, the legendary Nikki Lauda won the ProCar championship. And then, the FIA racing rules changed again and the M1 DID qualify. But by then, BMW was firmly focused on open wheel racing and the M1 faded into history.” Which is a shame, because unlike so many other mid-engine supercars of the period, the M1 is as wonderful to drive as it is to look at.

"Zero to sixty takes about five and a half seconds, which isn’t fast by today’s standards, but it was back then.

And the 273 horses from that straight six give me just enough oomph to let me know I’m in a serious sports car. I’ve got power at any point in the rpm band. And on the other hand, its actually very civilized. I can see out clearly, the shifters nice and easy, The clutch isn’t too heavy, I can reach all the dials. It’s the kind of car you take on a lazy road trip up to the alps.”

But it’s certainly not lazy in the corners! The M1 handles beautifully, with outstanding feedback, and loads of grip that gives you more and more confidence, the faster you go.

You settle in quickly and after only a few minutes, you feel as though you’ve been driving it for years. Simply get in, turn the key and drive.

“Unfortunately, with fewer than 400 made and less than that on the road today, the chances of experiencing an M1 like this are becoming increasingly difficult. So if you ever do get the opportunity to see one, let alone drive one, just remember how close we came, to never having it at all.”