Strike up a conversation with any gearhead about great European mid-engine sports cars and you’ll typically hear the same names- legends like the Countach, Testarossa, Miura, or Esprit. But there’s another exotic that deserves to be included. One that spans more than 20 years, sold thousands of units, and was sculpted by one of the greatest car designers of all time. Our own Roger Mecca shares a car that may not have the reputation of its rivals, but it’s not lacking where it counts.

ROGER MECCA: Amidst the mid-engine Ferraris, Lamborghinis, Maseratis, and other Italian mainstays we all know and love, there’s one Modena-born exotic that fell through the cracks of worldwide popularity, despite having the looks, power, and presence to make jaws drop and hearts race. 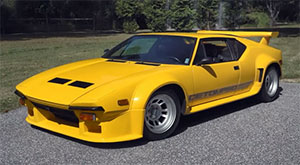 It was the De Tomaso Pantera, a sleek and stunning mid-engine coupe that checked every box on the supercar must-have list. Between 1971 and 1993, more than 7000 of these were made, but despite all of its wonderful attributes, it never quite caught on like its rivals did. And looking at it today, you have to wonder- why not?

LASHDEEP SINGH: Often the cars here weren't used for high speed use as they were in Europe and that’s what the car was designed for. So when the car was used as intended it worked quite well and because of that there was some negative press that unfortunately tainted the future reputation of the market and the car.”

ROGER MECCA: Lashdeep Singh is the owner of this 1981 Pantera GT5-S. While he’s had several iconic exotic sports cars over the years, the Pantera, which is Italian for Panther, was at the top of his list from a very young age. 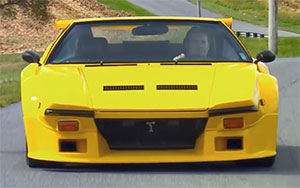 LASHDEEP SINGH: We were visiting a local Ford dealership and we pulled into the service lane, parked outside actually in the parking area, and we saw a black car about 40-inches high. And I was too young to know what it was but was old enough to know that I needed to tug on my dads pants and say, ‘what is that?

It’s always had a place on my wish list for cars.

With a design created by the legendary Tom Tjaarda, a race-bred 5.8 liter Ford Cleveland V8, and a tight road-hugging chassis, the Pantera had the performance to back up its good looks. And then in 1971, De Tomaso got a huge boost when Ford decided to enter into a partnership to sell Panteras in select Lincoln-Mercury dealerships across the country. And at half the price of a Ferrari, while still being just as beautiful and wonderful to drive, the stage seemed to be set  for a huge success for De Tomaso. In Theory. But in reality, there were problems. While the Ford-sourced engine and Z-F transmission were rock solid, fit and finish of the first U-S cars was less than perfect as Ford looked for ways to pinch pennies. Rust was a common problem and the cars were prone to overheating. 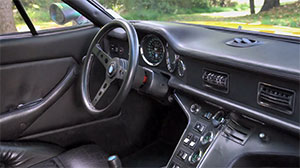 Lincoln-Mercury dealership mechanics used to working on Continentals and Comets were left scratching their heads whenever a Pantera showed up for service. And then in 1974, just three years after Ford’s Lee Iacocca helped convince Henry Ford II to create the partnership, it ended- and from then on, De Tomaso was on his own. But during those three years, nearly 55 hundred Panteras were sold. And De Tomaso used every problem as an opportunity to make the car better. So by the time the 1980s rolled around, this was a well sorted out automobile that was just as fun to drive but much more reliable.

The 351-cubic-inch V8 pumps out 350 horsepower and can hit 60 in under five and a half seconds- the same time as a comparable Countach- which cost twice as much as a Pantera. The driving experience however, is priceless. This is a 40-year old car, but it still feels very fast! And the sound coming from over my right shoulder- that is what driving fanatics live for! But the thing I like most is how special it feels to drive a Pantera. You’re never going to get bored, you’ll never become complacent no matter how many miles you put on this car. It’s always going to feel… like an event.

And as of late, car connoisseurs are taking notice of how special the Pantera really is. Versions as nice as this can fetch well over 150-thousand dollars, but you can still get into one for around 60-grand. Adding to the cool factor is just how seldom you actually see one. But maybe that’s a good thing.  After all, when you’re named after one of the most elusive animals in the jungle, you don’t really want anyone to see you coming.