Germany is known for its performance sedans, Italy for its exotic sports cars and England for the roadster. American automotive industry is certainly famous for one thing: red, white and blue V-8 muscle cars.  As our own Roger Mecca discovered, the idea behind one early muscle machine is quite a story, and like all good car tales, it didn’t begin in a boardroom, but in a garage.

ROGER MECCA: If there’s one genre of automobile that America is synonymous with, it’s the muscle car. Since they roared onto the scene in the 1960’s, many American car fans have turned their noses up at the racy imports from Europe and Japan in favor of small-block V-8s from Detroit. And if you’re like most of them, when you think of a classic American muscle car, images of Mustangs, Camaros, and Challengers instantly come to mind. 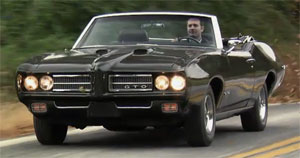 "But it wasn’t the mustang or the Camaro or the Challenger that brought about the muscle car era, it was this: the Pontiac GTO. And for an entire generation of gear heads, it was the only car to have.”

Chip Miller is the co-owner of Eurostar Auto Gallery in Cockeysville, Maryland, dealing in vintage and exotic automobiles. He’s also one of the GTO’s biggest fans.

CHIP MILLER: “It was just beautiful in every sense. The rumble, the exhaust note was spectacular. Something I don’t think anybody had mastered as well when Pontiac brought that car out.”

RM: "It’s actually a miracle the GTO was built at all. Back in 1963, general motors declared they weren’t going to get involved in auto racing anymore. And since Pontiac was the performance brand of GM, they had to figure out something else to do!” 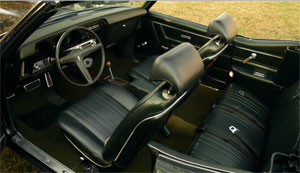 What they did, was find a loophole. It turned out the regulations handed down from the bosses only applied to distinct models, not variations or special options packages. So the engineers at Pontiac got clever with the design of a car already in production, the new mid-size Tempest which was set to debut in 1964.

John gave him the go ahead and in a week the GTO prototype was burning rubber down a racetrack.”

And that’s it. That is how the legendary GTO was born.  No fancy board meetings, no marketing gurus, no focus groups or hours of research looking at demographics. Just a couple of gearheads trying to figure out how to pack more horsepower into something with four wheels without the boss finding out! 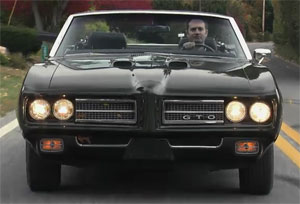 "So what’s it like to drive a vintage GTO. Well, this is a 45 year old muscle car which means it has drum brakes, very light steering, it weighs about 5 tons and the suspension is a little bouncy.

All of that adds up to a car that doesn’t like to go around corners too fast. But that doesn’t mean it’s not fun to drive.”

You see, this car was never meant to be a tight-twisting roadster. It was built to cruise and glide down the highway and when needed, fly down Main Street when the light turned green. And of course, there’s my favorite part, the sound!

Depending on the variation and year, horsepower will be between 350 and 380, you’ll reach 60 miles per hour in roughly six seconds and top speed will be in the 140 range. But while the performance is tame by today’s standards, the presence of the GTO just seems to increase with each passing mile.

CHIP MILLER: “…all the way around, from every imaginable angle, the car says ‘Look out, I’m here’.

It makes a statement and I think that’s why it’s endured, just like a good rock band has. When the music’s classic and it’s good, it lasts.”

RM: "So by now, you probably want to fulfill your childhood dream of owning a GTO. Well you’re in luck. Because they made so many of them over the years, you can a really nice example, just like this, for under 40-thousand dollars.”

Sadly, as we all know, Pontiac and the GTO name are gone. But the spirit, fun and sheer joy of driving live on in this beauty, the one car we can thank for delivering American muscle.