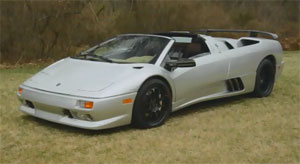 When it first steaked onto the world stage in 1990, the Lamborghini Diablo was unlike anything we car junkees had ever seen. Indeed, it continued the company’s legacy of making rapid head turning cars. No surprise, it’s also a favorite of our own Roger Mecca. Now, he tracked down one particular diablo with a past as dramatic as its looks.

ROGER MECCA: Even by today’s standards, the Lamborghini Diablo still makes jaws drop and the hearts of car lovers swell, including mine.

So after much searching, I was delighted to find one to take for a spin to see if it deserved to be on the pedestal I’d put it on when I was a teenager.

ROGER MECCA: “While it’s no secret that a Diablo will get noticed, this particular one caught the attention of the FBI, and took investigators on a journey from California to Hawaii, across the country before finally ending up here, in Maryland.” 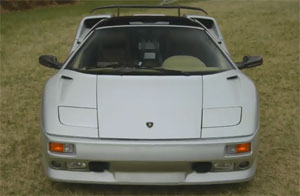 CHIP MILLER: “They captured the car only after it got to Maryland and somebody who was on their toes in the police department happened to look at this car and not quite buy the story about the car. Probably one of the alarm bells was the price on the car looked like too good a deal to be true.”

ROGER MECCA: And we all know what that usually means. After the owner was cleared of any wrongdoing, the car needed to be sold to recoup a laundry list of costs and expenses, while also getting it back to its former glory.

To do so, they turned to Chip Miller of Eurostar Auto Gallery outside of Baltimore, an expert in exotic automobiles.

CHIP MILLER: “when you look at this car, it’s timeless in its beauty. The body on this car is as pretty today as the day it was built in my estimation.”

ROGER MECCA: I have to agree. Even today, the Marcello Gandini designed body still looks more at home in a sci-fi movie than a highway. But the Diablo was much more than just a pretty face. 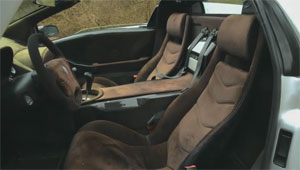 When it debuted in 1990, the 201 mph top speed made it the fastest production car in the world, making the 230 to 280 thousand dollar price tag seem almost reasonable. Even by today’s standards, it’s incredibly fast.

The Diablo was also a massive sales success for Lamborghini at the time, selling more than 3000, a big number for the brand.

ROGER MECCA: "I’ve waited 20 years to drive a Diablo and now that I have, what do I think? Well, there’s no power steering, the clutch is so heavy my left leg has a cramp and I have to put it all the way to the floor for a smooth gear change which is pretty hard because of this gated shifter. It’s as wide as an oil tanker and on top of everything, there’s the noise.” 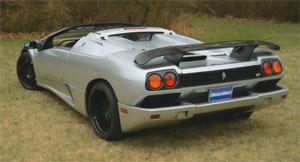 It takes about five seconds to get the one-and-a-half ton beast to 60, but it does feel faster than that.

Even after driving for several hours, I never felt relaxed behind the wheel, like if I didn’t give it my full attention, it would punish me.

Coupled with the driving elements I mentioned and a left leg getting weaker by the minute, you might think I was a little disappointed.

“But you’d be wrong. Because for me, the Diablo’s exactly what a supercar should be.”

Today’s consumer has easy access to cars with nearly the same amount of horsepower as the Diablo, for less than 40-thousand dollars.

Add this to how easy these modern speedsters are to operate and the true power, ferocity and risk can become easily masked. Owners can get a false sense of security, thinking these cars are much easier to handle than they are. 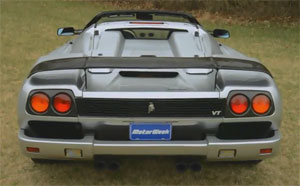 But the Diablo masks nothing. This is NOT a car you simply hop into and take for a spin. It’s always intimidating and always demands your respect. And that’s what I love.

“It has as about as much in common with a family sedan as a camel does with a Preakness racehorse.”

Police spent nearly 20 years searching for this Diablo, but thankfully it WAS found. Because in some ways it’s the last of its kind for Lamborghini and of the supercar.

Since Audi took control in 1998, the sensible Germans have smoothed some of the brand’s infamous quirks and maybe, just a bit of the magic was lost in the process.

“But lucky for me, the Diablo is as wild and untamed as the legendary Spanish bull it’s named after. And while today’s supercars are amazing, I’m going to have to keep this one on top of the pedestal where I’ve had for the last 20 years.”