From Alaska to Zimbabwe, one vehicle has blazed more trails into the wildest regions of the world than any other, the Land Rover Defender. Originally conceived as a farm vehicle, the design used Aluminum ALLOY left over from World War two fighter planes. When assembly stated in England in 1948, no one imagined the Land Rover would become synonymous with adventure, and beloved by auto-enthusiasts worldwide. Including our own Roger Mecca. So he set off to discover for himself why so many have fallen so hard for such a simple machine. 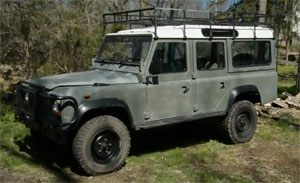 ROGER MECCA: In the long and wonderful history of the automobile, perhaps no vehicle has been as synonymous with blazing trails, exploration and getting dirty in the farthest reaches of the globe, like the Land Rover and more specifically, the Defender.

“Now I know what I just said is considered blasphemy among Jeep fans, but consider this little factoid: in the 20th century, the first vehicle ever seen by 60 percent of the developing world was the Land Rover. And that doesn’t happen unless you’re driving a vehicle where no vehicle has ever gone before.”

TREVOR GRIFFITHS: “They have a great deal of ground clearance, a wonderful combination of engines, transmissions and transfer cases with gear ratios that make it very easy to take a large load of people or cargo over very difficult terrain, over and over for miles and miles and kilometers and kilometers.” 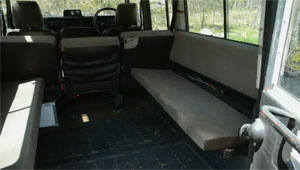 RM: Trevor Griffiths is the owner of British four by four Specialists in Elizabethtown, Pennsylvania and has been driving and working on land rovers of all kinds his entire life. But even after all these years, they’re still able to impress him.

TREVOR: “I suspect the vehicle most of the time can outperform my abilities. You try an obstacle, you accomplish it, you get over it, everything’s still intact. You say, ‘okay, well let’s see if we can do THIS.’”

RM: Until 1983, the Land Rover Defender was simply called a Land Rover, built by the British automaker Rover. In 1983, the name was updated to the Land Rover 90 and 110, referring to the wheelbases of the two models. Finally in 1990, the Defender name was introduced to help distinguish it from the new Discovery model. And then in 1993, Defenders were officially being sold in the US.

But regardless of what it’s been called over the years, driving one has always been on my auto-bucket list.  "So today is particularly special for me because not just because it’s my first ever time driving a Defender, but it’s a chance to see if it lives up to its legendary status and enjoy it in its natural habitat- off road!” 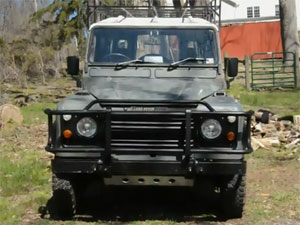 Unlike today’s modern SUVs and CUVs, the Defender has always been much more at home as far from asphalt as possible.

In fact, driving it on pavement is nothing special. It’s noisy, bumpy, and about as precise as a tractor. But none of this matters. Not even a little.

Because unlike the SUVs of today, getting off the pavement and onto the dirt is what this thing lives for.

"If I’m being totally honest, I have never been a huge fan of modern SUVs. The 4 Runner, the Land Cruiser The Rubicon and the Defender to me, have always been the true sport utility vehicle. They’re not happy running errands or going to an office or stuck in traffic. It wants to be out here in the wild, finding the deepest, darkest corners of the globe and when they get there, turn around and find something dirtier.”

So after spending an entire day behind the wheel of one of man’s greatest automotive creations, what’s my verdict?

“It. Is. Awesome! Just like a great sports car, like a Cayman or Miata inspires you to drive faster and harder, this thing is almost daring me to find something steeper and rocker, and muddier.” 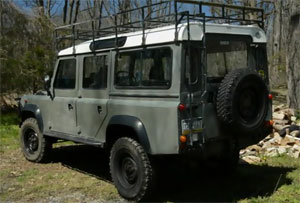 And no matter what kind of terrain is thrown at you, there’s an undeniable confidence that NOTHING can get in your way… even when faced with a particularly technical descent.

TREVOR: “Nice- keep all the wheels on the ground. Good choice, good choice… …that was exciting”

RM: But alas, as of January 29, 2016, those moments of excitement are coming to an end. On that day at 9:22am, the final Land Rover Defender, a 90 soft top, rolled off the assembly line in England, ending a 68-year production run. But don’t worry. More than 2 million remain, and of those, an estimated 70% are still running in some form somewhere in the world today. So you should have plenty of chances to experience this legend for yourself.

Just be ready to get dirty.