We’ve just seen how Ford has brought the GT350 name roaring into the 21st century – adding massive amounts of horsepower, performance, and technology – to make it one of the fastest Mustangs ever. But to really come full circle, we sent our own Roger Mecca on a mission, to take a close look at the classic 1960s GT350, to see if that original stallion’s reputation is worth a half century of admiration. 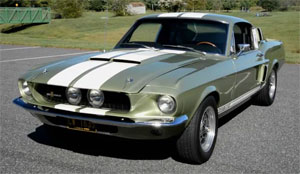 Roger Mecca: The first Ford Mustang Shelby GT 350 rolled off the Shelby assembly line in Los Angeles in 1965 and immediately, fans declared the GT 350 to be the supreme street racer of the day.

And in 2015, this icon still carries as much prestige as it did 50 years ago.

"For a lot of car lovers, myself included, when I think about a classic Shelby Mustang, this is what comes to mind- the 1967 GT350. And the owner of this particular Mustang, Carl Morgan, well for him it was love at first sight”

CARL MORGAN: “When I walked into the garage and I took my first look, it was like, ‘Ok, I don’t know how much this guy wants for this car, but I’m gonna buy this’.”

ROGER: Since high school, Carl had always wanted to own a GT350. He’d later purchase several classic and modern Shelby Mustangs, but his dream car eluded him.

Then one evening, after a Mustang club meeting, a guest speaker, on hand to discuss classic car insurance, presented Carl with a once in a lifetime offer.

CARL: “Everybody had left, he stayed around and we chatted and he says ‘Oh by the way, my son has a Shelby for sale’ and I was like ‘Oh, OK!’…He gave me his number and my son and I went and looked at it the next day and I wouldn’t leave the garage until he sold it to me.”

ROGER: And when you look at this masterpiece, can you blame him? From the hood scoops and side vents, the grill-mounted flood lights, the fat stripes down the middle and aggressive lines everywhere, this is one of the most eye-catching cars ever made. In a world filled with Jags, Astons and Ferraris, few American cars grab your attention like the classic GT 350 does.

But what many of those pretty European racers don’t have is the presence that this does. It simply demands and then grabs hold of your attention. Cool cannot begin to describe it.

"Now I think we’ve established this is one of the most beautiful cars in American automotive history and I could stare at it all day, but we’re not here to stare. We’re here to drive.” 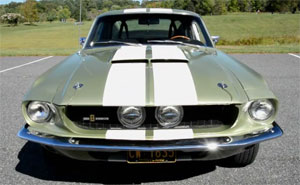 "First thing you notice when you start driving is it’s so busy. You’ve got noises coming from the back, the front, the engine, the exhaust, it rattles, it squeaks, it bounces. You definitely notice this is a 50- year old automobile.”

Which also means you dealing with 50-year-old performance figures. It takes 7 seconds to reach 60 miles an hour and your top speed will settle in at about 140.

"Now I know by today’s standards that doesn’t sound very fast, but this car isn’t about straight line speed if you’re buying one today. You buying one because of the entire package.

The looks, the persona, the history and yes, it’s about as fast as a modern day Honda Accord Sport, but at the end of the day, you’re not driving an Accord. You driving a Shelby Mustang GT350.”

And once the RPM’s climb past 4000 RPM and all 306 horses in the 4.7 liter V-8 start galloping, the speedometer starts moving! And where modern sports cars seem to dampen the sensation of speed, classics like this tend to amplify it, making 40 miles per hour feel like 65 and 65 feel, well, pretty awesome. 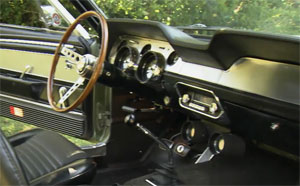 But it’s at those speeds where the nagging muscle car stereotype rears its head: the handling.

"Steering feel’s actually pretty good, that’s not the problem. It’s the suspension. For a winding, twisty road to be handled well in a sports car, you need something that’s nice and firm and you do not have that in the GT 350. And that’s where it really falls apart.

When the road gets curvy and the speed starts to climb, you have no choice but to back off because I just don’t feel comfortable going too fast on a twisty road.”

But who cares? Simply cruising down the highway feels like a special occasion in this car and after a while, you find yourself smiling like a teenager! Anticipation for the new GT350 might be high, but placed next to this beauty; I bet the “old man” would get a whole lot more attention than the newbie. And in my opinion, it would be well deserved!