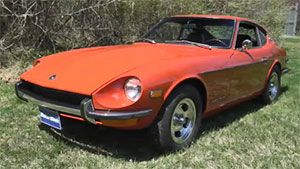 In the late 1960s, imported Japanese cars were still a pretty rare sight on American roads. And when you did see one, it was likely small and boxy. Well, that all changed with the arrival of the 1970 Datsun “z-car”, a fastback two seater that would become one of the most popular sports cars ever. Our own Roger Mecca wanted to find out for himself why the original 240 z achieved such legendary status, and changed America's view of Japanese cars forever.

ROGER MECCA: Even fifty years ago, imported Japanese cars were already making a name for themselves as fuel efficient and reliable. But, with few exceptions, they were also snoozers, with little to attract U.S. performance fans. But that all changed at the New York Auto Show on October 22, 1969.

“On that fateful day at the Grand Ballroom of the Pierre Hotel, the automotive press got their first look at the new Datsun 240z, a car that not only helped redefined the perception of Japanese automobiles, but what a sports car could be.” 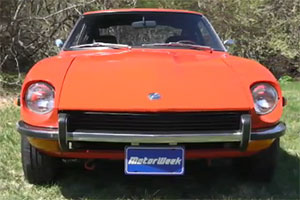 Nissan actually already sold a small sporty convertible already in the US, the Datsun 2000 Roadster, but it was underpowered and overshadowed by the imports from Europe. Toyota made a play with the beautiful 2000GT, but at a cost of over 7-thousand dollars; much more than a Jag E-type; 2000 GT sales were few, leaving the door open for another brand to make a move. And with the help of Nissan’s President of US Operations, Yutaka Katayama, the stage was set.

Mr. Katayama, or Mister K as he was later known, had studied the US auto market for years and knew there was a need for a sporty, practical and affordable GT. Over and over, he told his skeptical bosses in Tokyo that if Nissan could deliver one, it would be a success. But not even he could have predicted how popular it would become.

When you consider the recipe for the Z, it’s easy to see why America fell in love. This beautiful and sleek design emulates bits from the Jag E-type, C-3 Corvette, fastback Mustang, and yes, the Ferrari Daytona. The long hood and flared fenders were an immediate hit for car-crazy Americans. Under that hood was a 2.4 liter straight six delivering 150 horsepower; real grunt for the time. And the 35-hundred dollar price tag made it the affordable choice we’d been waiting for. 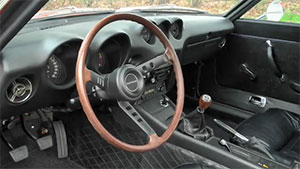 “Similarly priced sports cars like the Fiat 124, Opel Gt or the Triumph Spitfire couldn’t keep up with the Z’s straight six and the cars that could, like the 911, Corvette and E-type cost thousands more. So you had a beautiful car, that was as fun to drive as a Porsche, but cost a lot less. Nissan had struck automotive gold.

By 1972, Nissan had sold more than fifty thousand Z’s in the united states. For perspective, that’s almost twice the number of Corvettes that were sold the same year. But it was more than good looks and price points that made the Z such a success. Word quickly spread that this car was a blast to drive.

"With a 0-60 time of about 8 seconds and top speed of around 130, it was never blisteringly fast. But that doesn’t mean it isn’t quick. Up around 3000 rpms, it has real pull. Gear changes are smooth and easy and when the road gets curvy, the smile on your face is inevitable.” 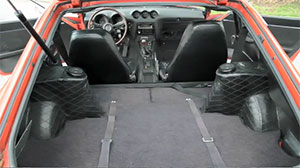 Mr. K and the Nissan designers never wanted the Z to be a lightning-fast supercar. Instead, it was a true grand tourer for the masses, a car you could take on long road trips and reliably use every day without fail. The low curb weight of just 2300 pounds and precise handling made it a hoot to drive and word spread that this was a sports car anyone could enjoy the moment they turned the key.

“There is something to be said for how approachable a car is for a new owner. Some sports cars take a long time to get comfortable driving. But not this one. It’s taken me almost no time at all to feel right at home and the more I drive it, the more fun I’m having. That instant connection is the sign of a truly special machine. “ 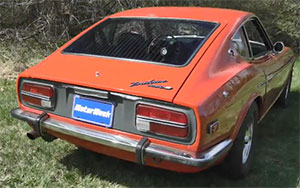 And special is the perfect word to describe the 240z. It launched one of the most respected and popular lines of sports coupes in automotive history and proved that beautiful, fun, and refined GTs were not reserved for millionaire playboys and CEOs. With the exception of a short hiatus from 1998-2003, the Z has been a staple of the Nissan lineup for almost 5-decades years. Few car companies can make a similar claim.

“Now for the best part. Because Nissan made more than 160 thousand 240 Z’s, finding one is relatively easy and getting a really nice one like this will set you back about 20 or 30-grand. Parts are also easy to find and because it’s so comfortable to drive and reliable to own, you can enjoy this icon every day, not just on select weekends when it’s 73 and sunny like with most vintage sports cars.”

Today, Japanese brands are behind many of the world’s best values in sporty cars; the Miata. WRX, and even the GT-R. But it all started with the 240Z. A car the world never saw coming, never knew it needed, but after that fateful day in New York, a car we couldn’t live without.